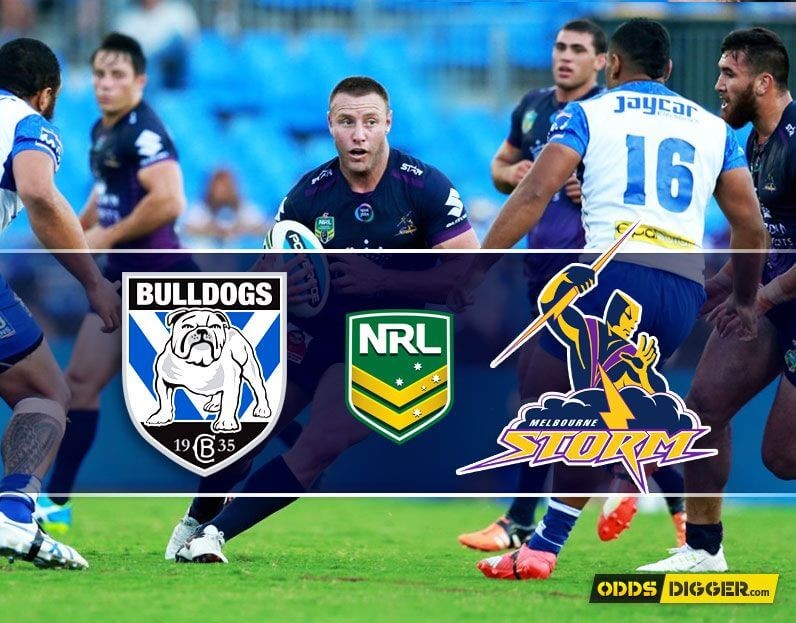 This is arguably one of the easiest opening-round NRL matches for OddsDigger's rugby league tips to call as the talent-packed defending champions open their account against a rebuilding Bulldogs outfit at Perth Stadium. Storm were about as dominant as it is possible to be last season, while Canterbury suffered a nightmare as they missed out on the finals for the first time in many a season. A poor 2017 campaign cost Bulldogs coach Des Hasler his job, leaving club legend Dean Pay with an unenviable task, which cannot get any harder than facing the best of the best first up.

Our partners: 777Spinslot casino presents access to the most beneficial special offers in the industry, from welcome offers to bonuses, online casino free spin no deposit and free bets.

The rugby league betting odds could not be much clearer. Storm are hot favourites to win this match at Perth Stadium and no wonder. They may have lost Cooper Cronk, Jordan McLean, and Tohu Harris, but their back line is still as potent as it gets, featuring – among others – Billy Slater, Josh Addo-Carr, try machine Suliasi Vunivalu, Cameron Munster, and Brodie Croft. Their attacking flair will see off better teams than the Bulldogs this season and don't be surprised to see an early contender or two for try of the season in Perth.

It has been said already. Storm are going to win this, and probably by a fairly sizeable margin. Such is the expectation of an opening-round away win that odds offered by Betfred on a Melbourne win are mirrored across the bookmaker spectrum. It would be a brave punter – or die-hard Bulldogs fan – who leans the other way. While the hosts’ big and aggressive pack will more than likely hold its own, their relatively limited attacking options compared to the hot-knife-through-runny-butter skills of the Storm means it looks like it will be a long night at the office for the home side.

The Storm's all-out attacking prowess – even without the brilliance of Cronk, who has moved on to Sydney Roosters – means they are likely to score a hatful of tries just about every week. They have the two quickest wingers in the game, working outside some of the smartest players around in Chambers and Scott. Which is why even a 13-point plus win doesn't come with big odds – the 6/5 on offer from Betfair is about the best you're likely to see.

To see odds on the next event visit Canterbury-Bankstown Bulldogs vs Melbourne Storm odds page.