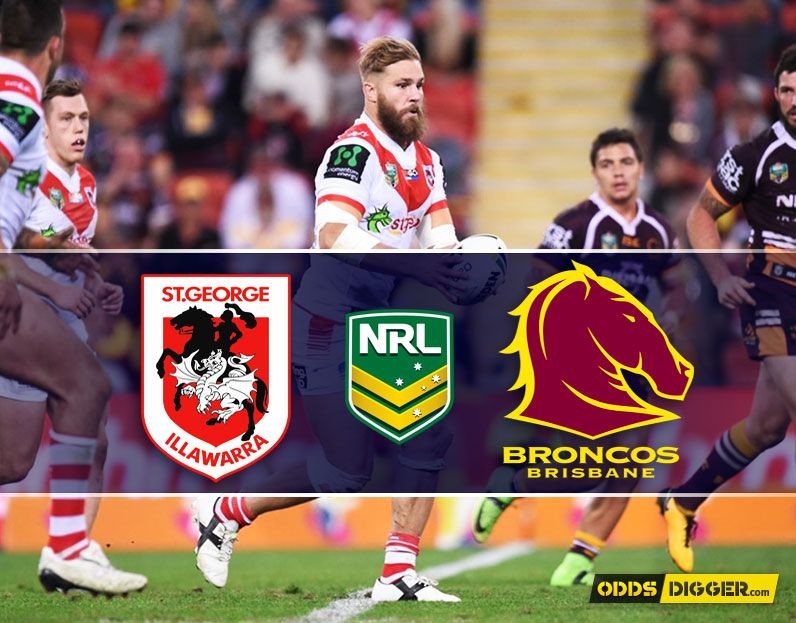 New season, new hopes, same ambitions. The 2018 NRL kicks off with this blockbuster encounter at Jubilee Oval. The Dragons come into the new campaign looking to right more than a few self-inflicted wrongs last season when they let a great start slip over the closing rounds and missed out on the eight in the cruellest fashion in the last match of the regular season. The Broncos, meanwhile, have the Grand Final in their sights, after falling one round short in 2017. While forwards stocks in Brisbane look a little depleted following the departures of Adam Blair, Herman Ese’ese and Jai Arrow in the offseason, the arrival of Jack Bird has added a real touch of class. It's no surprise, then, that the rugby league betting odds have this down as one that will go to the wire.

Opening round rugby league tips are almost always the most difficult to make. Pre-season outings offer more help to coaches than to pundits and punters. Generally, there's very little to go on before the campaign proper kicks off - but, in this case, there really is very little between the two sides in this season opener. Playmakers Ben Hunt and Gareth Widdop give the Dragons some attacking guile, and the pack looks like it will add some serious go-forward. But, despite the annual doom-mongering, the Broncos are always there or thereabouts. And it looks like that will be the case again here. It's going to be close at the Jubilee, but home advantage should count. Just.

The first game of the season and both sides will want to put down an early marker for the 25 matches to follow before the finals. Dragons fans, in particular, will expect much following last season's disappointment. Like those in the stands, head coach Paul McGregor will look to big signing Hunt, as well as another new arrival in forward James Graham to give them the drive they need for the opening day win on which Sportingbet - and all the other bookmakers - are hedging their own bets.

The rugby league gods have ensured the first match of Ben Hunt's Dragons' career will see him line up against his old side. To be honest, his final season at Broncos will not go down in history as his finest. He had already signed a big-money five-year deal to join the Dragons before the season started. Then, he was sidelined with a hamstring injury for six weeks and later dropped down to Queensland Cup side Ipswich Jets as halfback rival Kodi Nikorima enjoyed a strong run during a six-match winning streak. He returned to action for Queensland on the bench for Game 3 of the State of Origin Series - and finished the season for the Broncos with seven tries in 21 outings. What better way for him to start his career at his new club than by scoring against his former teammates?