Our partners: 777Spinslot casino was created with the intention of offering the best gameplay, customer experience, and it offers a vast variety of no deposit slots from the best game developers on the market.

The IAAF World Athletics Championships London 2017 is well underway. The competition is approaching the conclusion stages, as most of the finals will be held on August 13. In terms of the women’s game, the event is reaching its conclusion with Women's high jump final, Women's 100m hurdles final, and Women's 4x100m relay final being held on August 12. All the events will be held in the afternoon session. Let's see athletics betting tips﻿ and more. 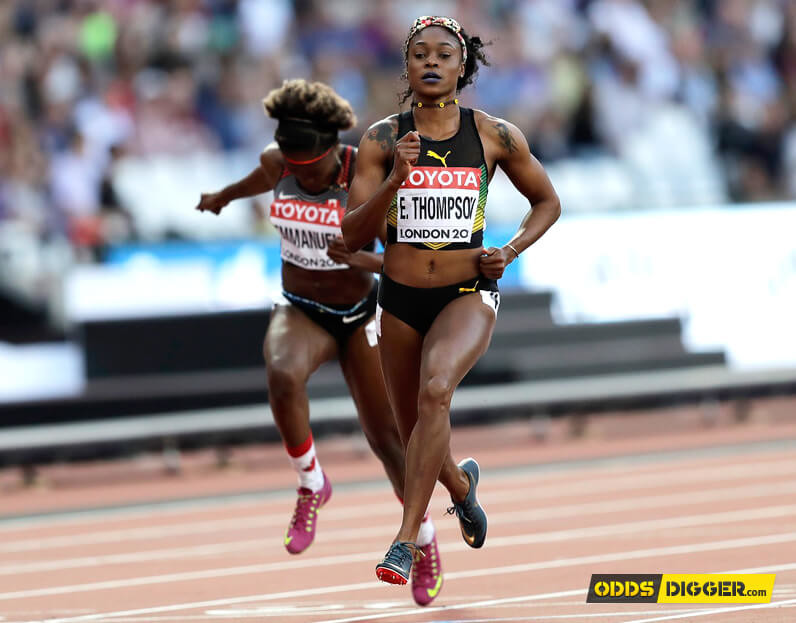 World Championships betting interest is high up on the high jump final, which will take place on August 12. Maria Lasitskene comes into the event as the overwhelming favourite after having managed to win 33 out of the 36 events since being victorious in this competition in Beijing.

Her win streak is now at 24 competitions. The overwhelming popularity means that it is only possible to find odds of 1/5 with Betway. Vashti Cunningham comes in at a distant second spot, but she is not nearly close enough. Cunningham is one of the youngest entrants in this event at just 19 years of age. For this reason, our experts do not think she can directly compete with Lasitskene for the title.

Lasitskene is the only jumper to overcome the 2-metre barrier outdoors in the summer of 2017 - a feat she has achieved eleven times. She is approaching her prime and the reigning champion wants to better Kostadinova's mark. Despite the short price, we recommend placing a bet on Lasitskene to win the event as she boasts the best performance.

The World Athletics Championships odds are available in great numbers for the 100m hurdles final in the women’s competition. Kendra Harrison comes under the event as the favourite for success, as per the latest Women's 100m hurdles betting tips. The 24-year-old was unavailable for the Rio last year even after having broken the world record. Her 12.28 time helps her stay ahead of Szekesfehervar. The 24-year-old athlete wants to prove a point and is motivated to achieve yet another success similar to her World Record with 12.20 at the event taking place in London before the Olympics last year: Muller Anniversary Games.

Sally Pearson also looks good on paper after posting the second fastest time. She has come from an injury spell but still managed to post a time of 12.48. Since his success in the 2012 Olympic title, this is her fastest time. It is one of the reasons for our team of experts to regard her as a possible challenger for Harrison given her World Athletics 2017 odds.

Another contender here is Jamaican Danielle Williams who took the gold two years even though she was the fourth best rated at the time. She is competing now, but her form is not outstanding, having missed out on a selection for 2016's Olympics. Kendra Harrison remains the favourite.

Jamaica and the USA have had a stranglehold on the Women's 4x100m relay final in recent years. Since 2003, the title has been won by either team. Jamaica come into the 2017 event as the favourites after having won the event previously with a mark of 41.07.

The United States came second with 41.68, while Trinidad and Tobago managed a third place finish with 42.03. The World Championships Athletics 2017 continues to witness USA being in a very strong position with regard to contestants. Tori Bowie leads the charge for USA, but they are not seen as strong as they once were – despite being successful at the Olympics with a gold medal. Women's 4x100m relay betting tips expect the Jamaicans to come out successful in this event. One can also get the best odds for backing Jamaica rather than the United States.

We back our last statement with the fact that Jamaica is spearheaded by the current fastest woman in the world. Elain Thompson will contend for gold and Christania Williams and Simone Facey should be feared as well in the Jamaican team. The country is give odds of @ 11/4 Betway.

Ready to bet? Best athletics odds﻿ for August 12's Women's finals are available at Betway, and our team strongly recommends you to use their feature-rich platform to grab their latest 'Up to £1000 for New Customers Only' Welcome Bonus!