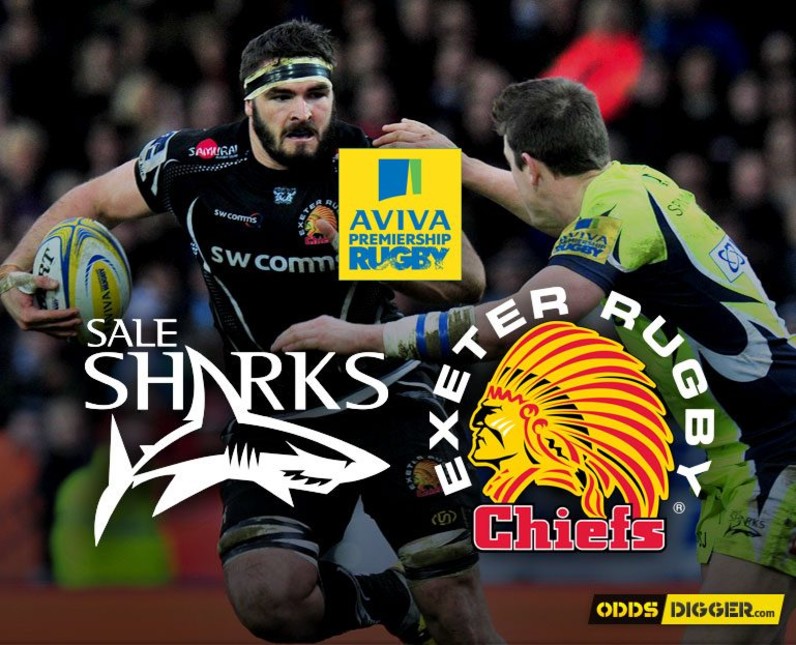 The European break brought mixed fortunes for the two sides, who meet at the AJ Bell at 7.45pm on Friday. Sale Sharks, who will want to improve on their current ninth place in the Premiership, held Toulouse to a draw in their opening second-tier Challenge Cup match - but then shipped 17 points in the final 13 minutes of their match against Top 14 side Lyon to lose a heartbreaker by three in southeast France. High-flying Exeter Chiefs, meanwhile, backed up a solid Champions Cup opening weekend home win against Glasgow with an even more impressive victory over a monster-sized Montpellier on Sunday.

We've seen before in the Rugby Union betting tips that there's no denying the massive potential of Steve Diamond's young Sale side. After all, it boasts pocket battleship Faf de Klerk directing proceedings from the back of a scrum that features the combative and immensely talented Curry twins, and afterburner-on-legs Denny Solomona scoring tries for fun out wide. But our Rugby Union Odds suggest that defending Premiership champions Exeter have the firepower to successfully compete on two fronts this season. And, even after that ridiculously short five-day turnaround from Sunday's trip to the south coast of France, they are expected to be too strong for an often fragile Sharks defensive line. Head coach Rob Baxter may decide to rest key players ahead of Harlequins' visit next weekend, but you should still expect plenty of fireworks from the Chiefs.

Despite coming agonisingly close to victory at Lyon in the Challenge Cup last weekend, Sale have yet to win on the road this season, but Sale's recent home record suggests the 7/5 odds on a home win at Betsson are entirely sensible. Certainly, Steve Diamond will be delighted that his side's first domestic match after the two-week European break is on home turf, where his Sharks are two for two in the Premiership and just a late penalty away from victory over high-flying Top 14 giants Toulouse in Europe. If he had it all his own way, Diamond would probably admit to wishing for slightly less uncompromising opponents than defending champions Exeter. Rob Baxter's Chiefs have lost just twice all season, to Gloucester and Leicester in the Premiership - but last weekend's die-hard Champions Cup victory at Montpellier hints that a Chiefs winning streak is not far from being on the cards.

There is a clear and obvious reason why visitors Exeter are expected to win this week's match under Friday night lights at the AJ Bell. It's all to do with their recent record - and not just against Sale, though that is impressive enough. But there's something about that five-day recovery period after the Chiefs' Montpellier away-day last Sunday that suggests they may start to run out of steam a little earlier than usual on their trip to deepest Salford. And that puts the draw - which is at 16/1 with Sunbets very much on the table. Coach Baxter has this week questioned the common sense of such a short turnaround between two key away games. He has insisted that his players will make the best of the situation, but usual and well-rehearsed recuperation plans must have been affected. It may be a long shot - but it just might pay off.

To see odds on the next event visit Sale Sharks vs Exeter Chiefs odds page.