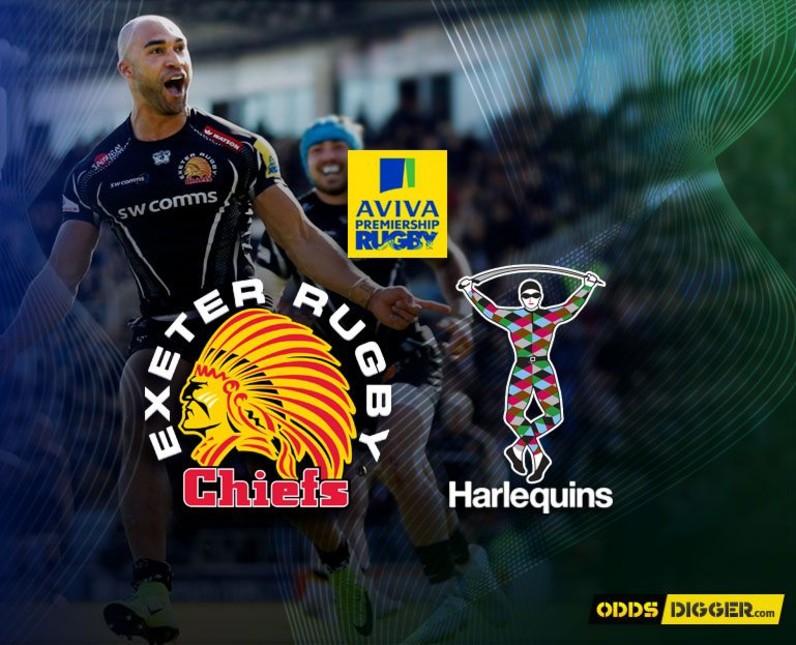 The Aviva Premiership is back this weekend and the Exeter Chiefs are looking to press Saracens at the top of the table after a fantastic start to the season. They lost their first game which was a surprise to many against Gloucester but since then they have gone from strength to strength, with only the formidable Leicester Tigers beating them in recent weeks. Harlequin FC look like being a mid-table team this season but they have won their last two games and a string of good results would further push them up the table over the coming weeks. Let's check our rugby predictions.

Our partners: Secure, respectable, and player-friendly – those are the three words that come to mind when talking about no deposit keep what you win casino 777Spinslot.

It has been a very impressive start for Exeter, who have done very well and sit just two points behind leaders Saracens. Alongside Saracens and Leicester the Chiefs look to be one of the title contenders based on what we have seen so far and it will be interesting to see how they fare over the coming weeks. Saracens already have top spot, and Leicester look in thrilling form so it will be interesting to see if they can keep up with those two, they will have to play well to do so.

Two recent wins for Harlequin FC have moved them up the table, although with three points separating six teams in the middle of the table, things are tight and they must continue to pick wins up. One huge thing in their favour is their ability to score points and they are one of two teams who have scored over 200 points so far, so you can always count on a thrilling game when Harlequin FC are in action.

Although Harlequin FC have won their last two games, this is a huge step up in class for them when they travel away to face Exeter. They are sure to give it a strong push, but Exeter look to be too strong for them and the home team are rightfully favourites to win this game comfortably.

Exeter will have to be careful though because Harlequin FC can put points on the board and if they continue to keep scoring, Exeter may struggle to pull away from them and win the game as comfortably as they should do. Let's check our tips along with recommended rugby odds.

We are not surprised to see Exeter as favourites to win this game, although we don’t think this will be as easy for them as the bookmakers suggest it will be. The handicap line on this game is 15 with William Hill, which is the best handicap line available, and on that line Harlequin FC are a great betting with a +15 advantage. We think Exeter will win the game with a big point difference, which makes Harlequin FC look very appealing on the handicap line.

Exeter Chiefs boast the advantage of playing home, and even though Harlequin managed to do some scoring recently, they will not be able to cope with Exeter Chiefs' powerful players. We're going for this market with 10Bet as they provide the best odds, but the main reason is because the home team is second in just two points behind leaders Saracens and they strategy is simply unbelievable. Also, their strength is also undeniable, and Harlequin FC will have a hard time away.

To see odds on the next event visit Exeter Chiefs vs Harlequin FC odds page.