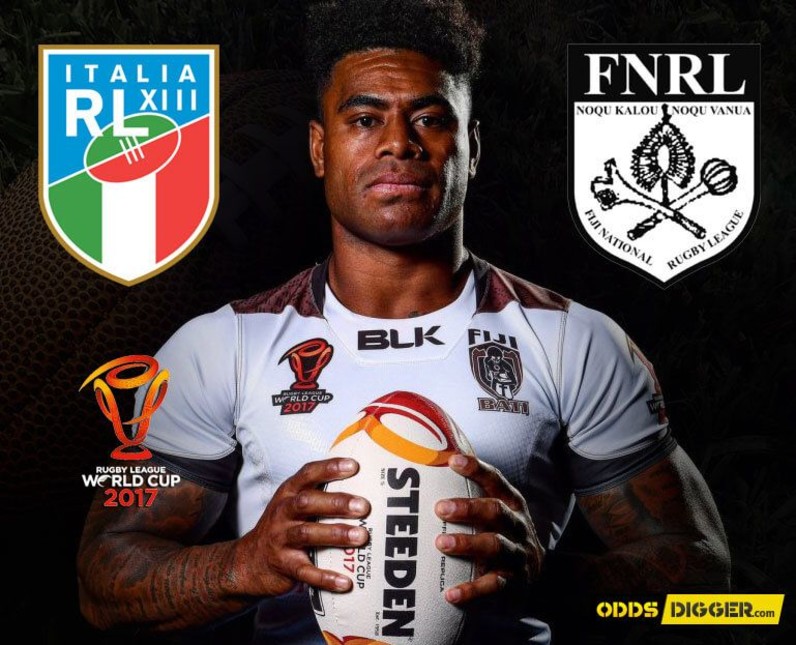 Fiji and Italy clash in a game that will decide who wins Group D of the Rugby League World Cup. With two wins from two games and a much better points difference, Fiji are clear favourites but they can’t take the Italians for granted. However, having said that, Italy will have to defend well, we have seen Fiji put up over 50 points in each game so far, and they are clearly a dangerous attacking team. Let's check our top rugby tips today for the World Cup!

Our partners: 777Spinslot is a well-known gaming platform that offers great no deposit money bonus offers and a wide range of games to its players!

Fiji have been in great scoring touch so far this tournament, posting an impressive 130 points in two games against Wales and the United States. Even when they go on to play better opposition later in this tournament, they will pose a threat due to their scoring ability and they are a danger to any team, especially someone like Italy.

Italy bounced back from a disappointing 36-12 loss in their opener against Ireland to record a good win over the United States. They won the game 46-0 and shut out the States in what quickly became a one-sided affair and a game where Italy could have scored more.

It is no surprise to see Fiji go into the game as big favourites and they should have the class in their line-up to get past this Italy team. Of course, the Italians will be trying to cause an upset, but we think this will be a bridge too far for them, despite putting up a strong defensive performance last weekend against the United States.

Fiji have a lot more to offer going forward and can really trouble the Italian back line with their strength and pace when they have the ball. With everything still to play for, Fiji should be good enough to record a comfortable victory over Italy in this one, a result which would take them into the next stage of the competition. Let's check the rugby league odds for this match!

The handicap line on this game with Sportingbet is 22, and they have the best price on Fiji to win. We think Fiji will be able to control the game and will be able to score regular points due to their attacking power. Their impressive 130 points accumulated in the matches against the United States and Wales are the reason why we pick this market. We have seen Italy keep the United States to 0 points last weekend, but this is a whole different game for them and one where we don’t think they will be able to cope.

Despite backing Fiji to win comfortably, one market that is really appealing is the total points market, where you can back under 48.5 points with Betfair at a relatively good price. While we do think Fiji will cover the handicap fairly comfortably, we can see them scoring around 35 points in the game, with Italy scoring around 10. That puts this handicap line in play, and with Fiji conceding just 18 points in two games so far, it looks to have a great chance. This is a riskier bet but should do the trick.

To see odds on the next event visit Fiji vs Italy odds page.