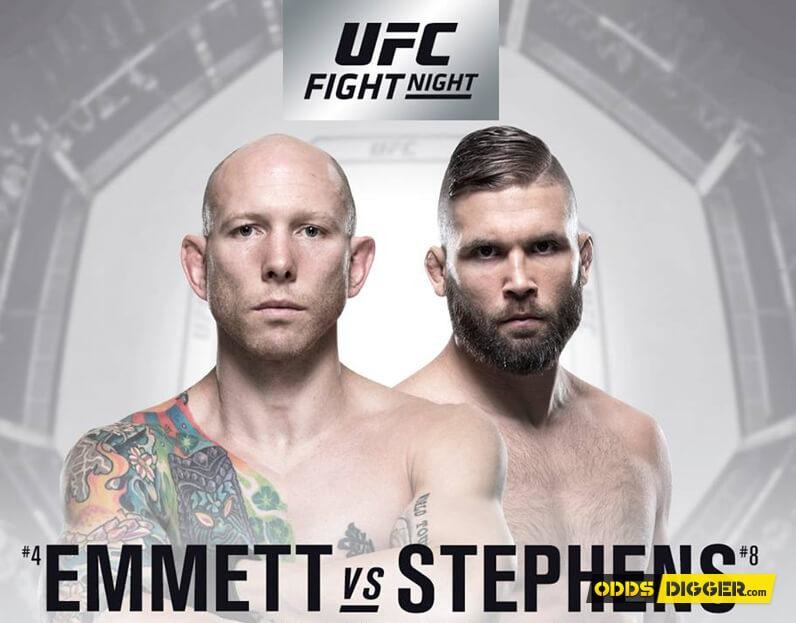 Josh Emmett comes into the match against Jeremy Stephens at the Amway Center. The fight is scheduled for February 24 as part of the UFC on Fox 28. Use our free UFC betting tips to start winning today!

Our partners: 777Spinslot casino presents access to the most interesting special offers in the industry, from registration offers to bonuses, online slots no deposit free spins and free bets.

The wrestling background provides Emmett with a significant advantage coming into the fight. He has the potential to improve his defensive game if required. Stephens has a very strong punching power which makes him extremely difficult to deal with when an opponent a slow on concentration. Furthermore, there are also not many other sides to his game.

The biggest weakness for Emmett is the punching power, which limits the 32-year-old to just 31 percent of victories as a knockout. The 32-year-old has had more of decision wins. Stephens does not manage to use his physical advantage properly and this often leads to the 31-year-old conceding control of the match to his opponents.

Stephens has a lot of strength when it comes to his punches but this does not necessarily translate into a lot of success for the 31-year-old. In the meantime, Emmett comes into the fight with a strong record and overall form. Apart from the loss against Desmond Green in April 2017, Emmett has appeared faultless in his fights. It is highly unlikely that Emmett will be losing this fight. The Josh Emmett vs Jeremy Stephens fight preview would back a win for Emmett. Use our odds comparison UFC tool to get the best prices, but here are some tips.

Emmett has shown in his time inside the ring that he is an extremely intelligent fighter, who is capable of spotting his opponent’s weaknesses and bringing them down using the same. His biggest advantage is to gain control of the match. Stephens has a lot of good physical qualities, but a victory for Emmett seems the likely outcome in the fight. Emmett has yet to clearly lose a UFC fight in the octagon, plus his overall balance will be the reason for winning this fight. He will grapple, wrestle and definitely wear down Stephens, limiting the power and forcing him to win another way. We like guys who have given us little reason to bet against them, and Emmett is one of them.

Stephens is definitely the flashier fighter here and has an advantage in punching power. Stephens can end things at any moment when he manages to land cleanly. He is also the slightly bigger fighter, which has its advantages. However, Emmett has the higher fighter IQ. Emmett is way more disciplined, would have the advantage if this fight goes to the canvas, and he is solid defensively standing up. The knockout victories have not been the flavour for Emmett, who has been more of a fighter to win through submission and end his fights slowly. These two fighters are quite balanced. Our Emmett vs Jeremy Stephens prediction would back this fight to go the distance with more than 3.5 rounds in total with Betfair.

This is a fight which can be watched on live streams. Furthermore, other fights are also available through the same means. It is available when you:

To see odds on the next event visit Josh Emmett vs Jeremy Stephens odds page.