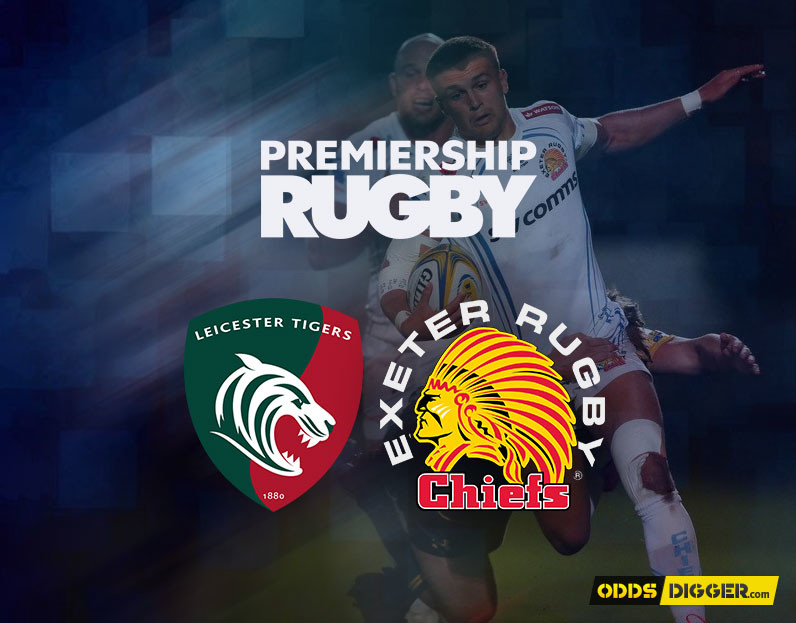 After a poor start to the season, Leicester Tigers seem to have found their mojo and are looking stronger as each game passes. With the addition of international class in George Ford and Jonny May over the summer, the Welford Road based side were expected to be one of this season’s contenders, but the opening two losses to Bath and Northampton Saints left many pundits scratching their heads. New Head Coach Matt O’Connor has had time to get his feet under the table and the Tigers are beginning to gain momentum and they will be hoping to turn Welford Road back into a fortress, a place many teams feared to come to. Exeter have started the season as they finished their title winning campaign last season and sit two points clear at the top of the table and will be confident going into the Tigers’ den and coming away with a win. Their last outing saw the Chiefs overcome fellow title contenders Wasps on home turf but they know that heading to Welford Road will mean that nothing can be taken for granted and they will need to be at their best to beat an improving Leicester Tigers side.

Our partners: 777Spinslot casino site provides access to the most interesting promotional offers in the industry, from registration offers to bonuses, no deposit free spins and free bets.

England and Leicester Tigers’ fly-half Ben Youngs remains one of the league’s most consistent players and having established himself in Eddie Jones’ England squad, he will be keen to catch the eye of the coach to earn himself a place in the starting XV. One of his main challengers to that role is rising Exeter Chiefs' star Henry Slade who already has experience in the national team and will be looking to continue the form that earned him an Aviva Premiership winner’s medal.

The Tigers started the season with a home loss to Bath, before leaving Franklin’s Gardens without anything to show in a loss to Northampton Saints. Since then, they have picked up and have earned wins at Harlequins and on home turf against Gloucester. Exeter suffered a shock loss on the opening day of the season to Gloucester but have since won three straight games and sit at the top of the table, two points clear of the chasing pack.

Last season saw the Tigers succumb to two heavy defeats with Exeter taking maximum points in a 31-10 home win, before securing another decisive bonus point win at Welford Road in a 34-15 victory for the away side. Predominantly, it has been the Tigers with the upper hand but as last season’s results have shown, the Chiefs are the form team.

This match is particularly tough to call as the Leicester Tigers have made significant and positive changes to their squad and under new coach Matt O’Connor there are already signs of improvement for a side that somehow manages to consistently make the top 4 each season, working on a sustainable budget. The club hierarchy seem to have made the decision to add players with international experience to go with their rising academy stars and it seems to be paying off but it is still early days. Home advantage for the Tigers will also be crucial and despite being reigning Champions and at the top of the table, for our free rugby union betting tips we think that Leicester have more about them than in previous seasons and they will look to make Welford Road difficult for opposing teams to come. Exeter won’t go down without a battle and this match is expected to be good and is not the one to be missed.

The Leicester Tigers at home are a formidable outfit and with the increased attacking options in George Ford and Jonny May, they will be a tough nut to crack having picked up their form over the last couple of games. Whilst Exeter Chiefs are the reigning champions and currently sit at the top of the table, they have been known to be vulnerable away from Sandy Park, as seen in their opening day loss to Gloucester and backing the Tigers to overcome the Chiefs in a tight contest and backing them at 41/50 at Unibet is the best value on the market.

With the close nature of this contest, the handicap market is where you may find the best value odds on the market and with the improvements in the Tigers over the last two games, we think that they may just sneak this one and by backing them at 10/11 at 10Bet, you are getting excellent rugby union odds on what will be a thrilling contest. Exeter, as reigning Champions will make it difficult and you don’t win a Premiership title without knowing how to pick up points on the road, but there is something about the Tigers this season that makes you sway towards the home team.

To see odds on the next event visit Leicester Tigers vs Exeter Chiefs odds page.