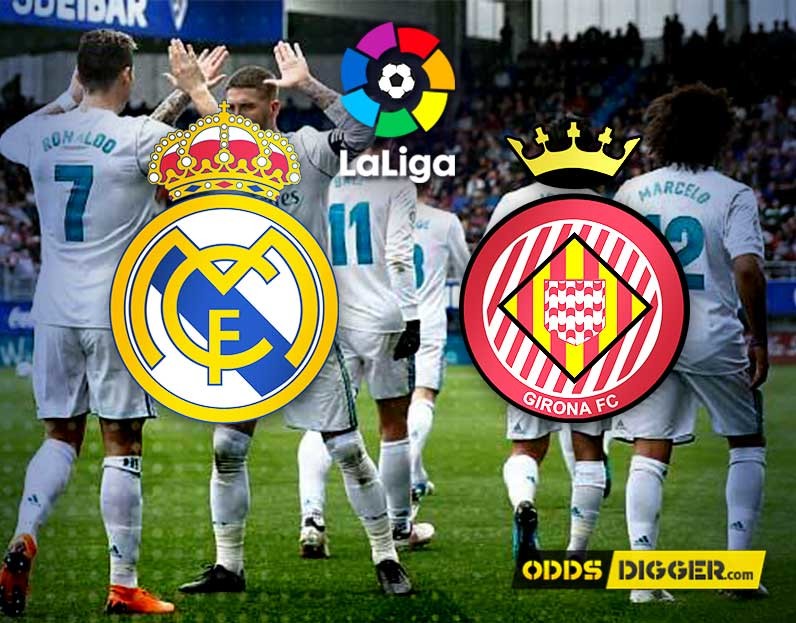 Zinedine Zidane’s men will want to take some revenge this weekend, before our Real Madrid vs Girona FC preview and football odds, with a defeat at Montilivi earlier in the season kickstarting a very poor run for the home side that threatened to cost the Frenchman his job.

Our partners: 777Spinslot casino gives access to the most interesting promotions in the business, from welcome offers to bonuses, free spins no deposit new and free bets.

Real Madrid have got back on track by winning their last four consecutive home matches in La Liga, with victories against Deportivo La Coruna, Real Sociedad, Deportivo Alaves, and Getafe helping Los Blancos to find their confidence once again.

Our Real Madrid vs Girona FC predictions back the home side to scrape another three points, which makes going for a narrow victory the way to go in our La Liga predictions. Girona FC are a real handful and will be tough to break down, but the hosts have shown a cutting edge recently.

Cristiano Ronaldo has been in much better form in 2018 and polished off two good chances to help sink Eibar recently. The Portuguese forward should be in good spirits and ready to help put Girona to the sword in the Spanish capital.

Real Madrid have won their last four home league games, which stands them in good stead heading into this one. Given that Girona managed to take three points against Los Blancos at Montilivi earlier in the season, there is a definite sense of the home side needing to restore their pride by getting their own back on Sunday evening.

William Hill offer the best odds on Los Blancos taking three points this weekend, as they attempt to pull away from Valencia CF in the race for third place in La Liga. Girona have won just one of their last seven away games in the division, with Sevilla and Barcelona taking wins against Pablo Machin’s men recently.

Although Atletico Madrid dropped points against Girona on two occasions this season, Real Madrid should be in a good enough run of form to sidestep this particular banana skin. It isn’t an easy task to break through the visiting lines, but once the breakthrough is made, things should get easier.

Our Real Madrid vs Girona FC bets back the away side to make a game of this, with the first meeting between these two sides at Montilivi showing that they are capable of going toe-to-toe with some of the best teams in the division. Machin’s men will show the same resolve at the Santiago Bernabeu, but Real Madrid’s offensive options are in much better form since the turn of the year.

Sunbets offer the best odds on this game to be decided by just one goal, with Girona only being beaten by a bigger margin that one goal on three occasions on their La Liga travels this campaign. Their organised defensive unit makes them a tough nut to crack, but with Cristiano Ronaldo, Gareth Bale, and Karim Benzema all scoring goals of late, Los Blancos won’t be short of inspiration.

Our Real Madrid vs Girona FC betting tips suggest that the home side will be able to push their way to three points on Sunday and right the wrongs of their first game against Girona this campaign. In order to keep their noses ahead of fourth-placed Valencia, Zidane’s men must keep pressing on.

To see odds on the next event visit Real Madrid vs Girona FC odds page.