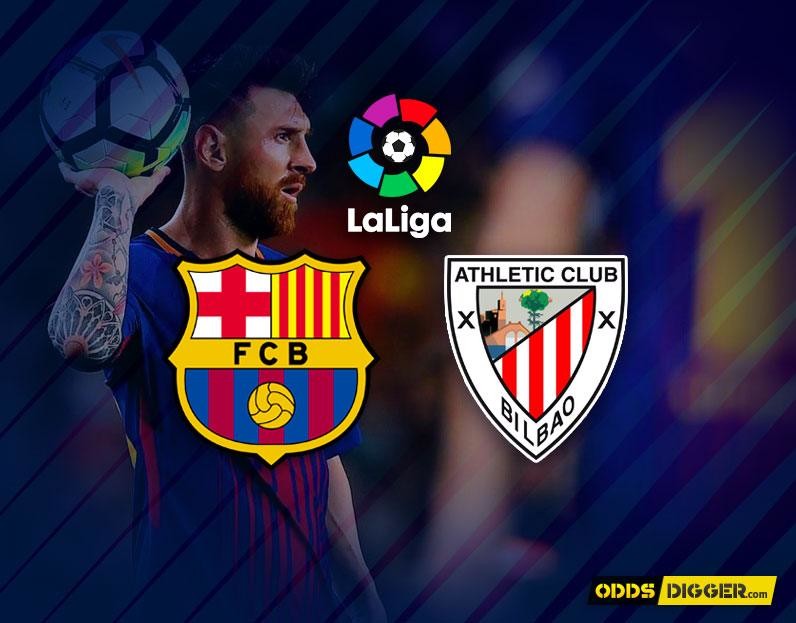 Ernesto Valverde will be happy to welcome his former employers to Camp Nou, ahead of our Barcelona vs Athletic Bilbao preview and soccer odds, with Los Leones in far worse form and much poorer situation since he upped sticks for Catalonia last summer.

Our partners: 777Spinslot casino gives access to the most interesting promotions in the industry, from registration offers to bonuses, free spins no deposit no download and free bets.

Athletic Bilbao has managed to pick up some points at home of late, but away from San Mames, they have been fairly poor, with their league position not telling any lies. Barcelona, meanwhile, is still unbeaten at the summit of the table and looks incredibly comfortable.

Our Barcelona vs Athletic Bilbao predictions back the home side to win comfortably at Camp Nou, which makes going for a clean sheet for the Blaugrana and an easy margin of victory - the route, which we are going down in our La Liga tips.

Los Leones’ recent form on the road has been awful with a win in the knockout phases of the Europa League their only bright spark in recent months. The jury is most definitely still out on Valverde’s replacement Kuko Ziganda, with no points expected to be taken this weekend either.

Barcelona has kept clean sheets in four of their last six La Liga home games, with the Blaugrana finding things fairly comfortable at all times at home this season. The hosts are still unbeaten across the entirety of their league campaign thus far, and Athletic’s involvement in Europe means that neither squad has a real advantage in terms of being better rested.

William Hill offers the best odds on Athletic losing and failing to hit the back of the net at Camp Nou, which looks incredibly likely given how they have been playing lately on their travels in La Liga. They haven’t scored in their last three away games, firing blanks against Sevilla, Atletico Madrid, and Girona.

Ziganda’s men last won on the road back in December, with their last five away jaunts in the Spanish top flight seeing them take just two points. It hasn’t been good enough from Los Leones and Barca should see them slip up yet again in league action.

A comfortable victory is a way that we are going to our Barcelona vs Athletic Bilbao bets, especially, given how poor Athletic are on the road. Their failure to hit the back of the net during their last three league away games shows their lack of cutting edge, and in Barca, they are going into a contest against one of the division’s meanest and most uncompromising defenses.

Unibet offers the best odds on the home side winning by a two-goal advantage by the full-time whistle, which is backed up by Athletic’s recent run on the road. They have lost by two goals in four of their last five competitive away games, with their only respite coming in an away game in the Europa League.

Our Barcelona vs Athletic Bilbao betting tips suggest that this will be another comfortable step forward for Valverde’s side; with the former Athletic boss unlikely to do his old team any favors whatsoever. The hosts have been terrific in La Liga, especially, at home, and they will take three points in the direction of the league title on Sunday.

To see odds on the next event visit Barcelona vs Athletic Bilbao odds page.