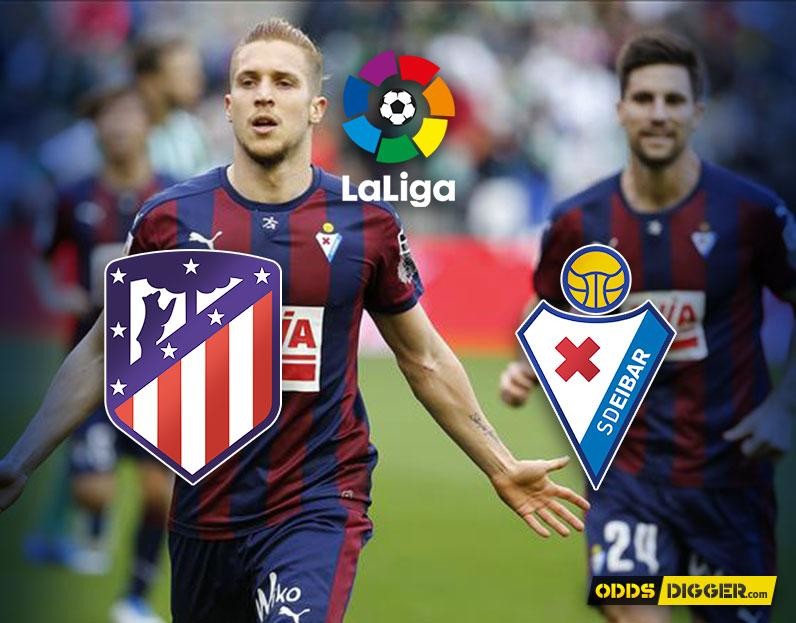 There should be a carnival atmosphere at the Wanda Metropolitano this weekend as the game featured in our La Liga Atletico Madrid vs Eibar preview is a cause for celebration for a number of reasons. In mid-week, Los Colchoneros won the Europa League, beating French side Marseille 3-0 in a one-sided final. The result means that they qualify automatically for next year’s Champions League.

Our partners: 777Spinslot casino gives access to the most lucrative specials in the business, from welcome offers to bonuses, free spins casino no deposit and free bets.

Ahead of this week’s Atletico Madrid vs Eibar betting tips, the home side have lost just once in seven matches in all competitions. In the Spanish top flight, Atletico Madrid need just a point on Sunday to seal second place ahead of city rivals Real. Although Champions League football has already been secured, finishing ahead of their bitter adversary would let the Los Colchoneros’ supporters win bragging rights.

Eibar have had an impressive domestic campaign themselves and they could still finish as high as eighth place if they can find a way to win this weekend. Los Armeros are finishing the season in a positive fashion – they have lost just once in five and have won their last two on the bounce. The football betting odds hint that a win at the Wanda Metropolitano might be asking too much, however, though Coach José Luis Mendilibar will hope to take advantage of any celebration hangovers in the Atleti ranks.

The home side under the microscope in this week’s free Atletico Madrid vs Eibar bets are bound to be a little jaded after their Europa League exploits in mid-week. Los Colchoneros are notoriously strong at home, though they also have a well-established reputation for being a low scoring team. Diego Simeone’s men have only been beaten once in the league on home turf in the 2017/18 La Liga season.

However, it’s also important to note that they have registered just twenty-eight goals in eighteen home matches in the league this term. That works out at an average of just 1.5 per ninety minutes. Defensively, they have been exceptional, conceding just six times across those same eighteen league home fixtures.

The visitors to the capital this week are also one of the division’s lowest scoring sides. Seven of their last eight games have finished with under 2.5 goals scored in them. Similarly, six of Atleti’s last seven matches have ended with under 2.5 goals registered. Our La Liga football match predictions advise you to couple a home win pick with the under 2.5 goals option for Sunday’s game. Betfred have some terrific prices to take advantage of in that combination market.

French international striker Antoine Griezmann takes centre stage in the final part of today’s Atletico Madrid vs Eibar predictions. Sunday should be a day of mixed emotions for the twenty-seven-year-old. On one hand, he will get to parade the Europa League trophy in front of the home support, but on the other, it is likely to be his last appearance for Los Colchoneros.

The most up to date La Liga odds suggest that the Barcelona-bound attacker is touch and go to score this weekend, but we think otherwise. Griezmann needs just one more goal to bring his La Liga total for the season to twenty. He will be desperate to sign off in style at a club that he has been at for four years.

Griezmann has already scored four times in his career against Eibar and the Frenchman is a great bet to add another goal to that personal tally on Sunday. Our free Spanish betting tips are backing him to end his Atletico career in a positive fashion against a defence that has kept just four clean sheets in their last nineteen attempts. The odds for our pick at Unibet are the best value around, so we recommend you check them out.

To see odds on the next event visit Atletico Madrid vs Eibar odds page.