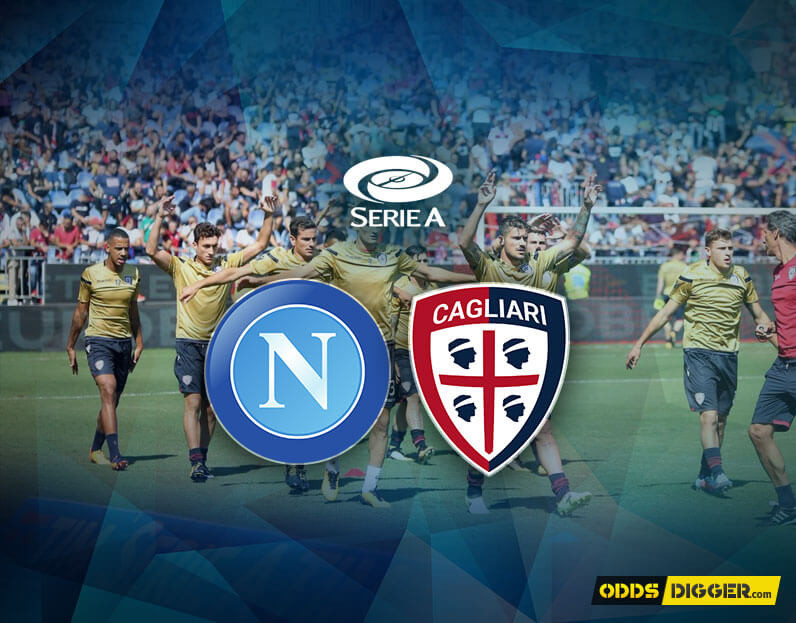 Maurizio Sarri’s men are playing some of the best football in the European game at the moment, ahead of our Napoli vs Cagliari preview and free Serie A predictions, with their free-scoring nature drawing plaudits for all around the game.

Our partners: 777Spinslot casino site provides access to the most interesting special offers in the business, from new player offers to bonuses, free spins on registration no deposit and free bets.

Napoli arrive in this game off the back of a 6-0 home thrashing of Benevento in the league, but they may be a little fatigued after playing some Champions League football on Tuesday against Feyenoord.

Our Napoli vs Cagliari predictions back the hosts down to their scintillating form and capability to create chances and score plenty of goals, with the weekend Serie A football odds favouring taking the approach that the Partenopei will blast Cagliari out of the water.

This game last season ended in a 3-1 victory to Napoli in May, with Dries Mertens scoring twice and Lorenzo Insigne adding a third with just over 20 minutes to go. Diego Farias’ reply was a stoppage-time consolation, nothing more.

Napoli have won their last five consecutive Serie A home games, with Sarri ensuring that his side are fantastic at the Stadio San Paolo. They’ve lost just two of their last 40 home games in the Italian top flight, with that record set to tick along for another game this Sunday.

William Hill offer the best odds in the particular market of Napoli to take three points without even conceding a goal. After beating Benevento 6-0 recently, it showed that the Partenopei can be merciless against one of the worst teams in the division. Cagliari have been similarly struggling and could be thrown under the bus too.

Atalanta did manage to find the back of the net in Napoli’s first home league game of the season, but they have far more quality than Sarri’s upcoming opponents. It should be another high-scoring affair, with the hosts netting all of the goals.

Our Napoli vs Cagliari bets foresee this as an entertaining game, despite the fact that Cagliari shouldn’t find the back of the net themselves. The hosts have scored three or more goals in six of their last seven matches in Serie A. They can rack up four or five against Cagliari with ease.

Benevento conceded six at Stadio San Paolo recently, with Fiorentina conceding four at the tail end of last season. Napoli have also racked up consecutive victories in the Champions League, with their most recent clash against Feyenoord racking up four goals in a 3-1 scoreline.

Our Napoli vs Cagliari picks suggest that the Partenopei will continue to be prolific, not least down to the players that they have in form so far this campaign. Dries Mertens has six goals in six Serie A games, with Lorenzo Insigne scoring twice. Jose Callejon has four goals to his name, too. Arek Milik picked up a serious injury recently, but it shouldn’t knock Sarri’s men off their stride just yet. Use Coral to find the best particular odds in the market, regarding this game yielding four or more goals.

To see odds on the next event visit Napoli vs Cagliari odds page.