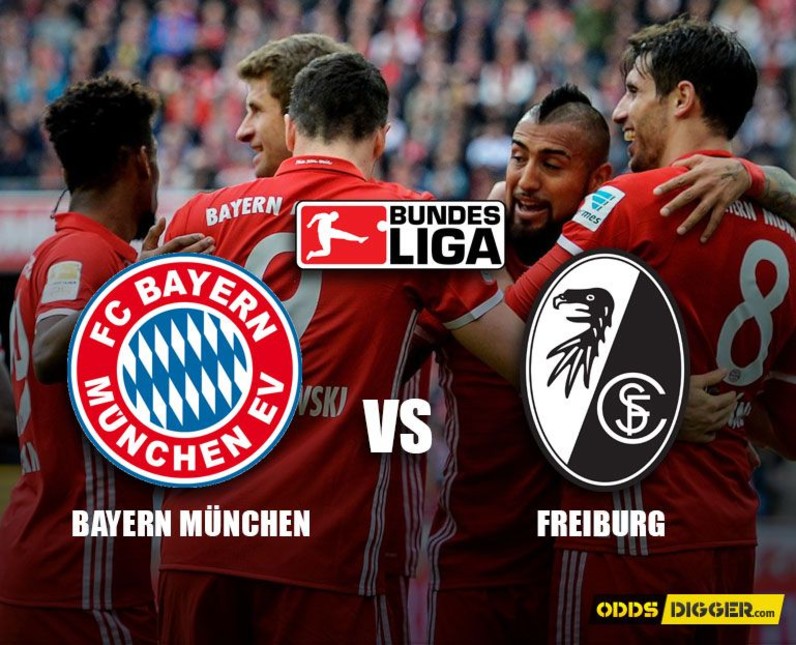 Ahead of our Bayern Munich vs Freiburg preview and soccer predictions, the hosts are on an excellent run of 25 consecutive home games in the Bundesliga without suffered a defeat. The last time it happened was back in March of 2016.

Our partners: 777Spinslot is a well-known gaming platform that offers amazing online casino no deposit bonus no download instant play and a sizeable variety of games to its players!

Bayern Munich have a new coach in Jupp Heynckes, with Carlo Ancelotti removed as manager after a poor performance against Paris Saint-Germain in the Champions League before the international break.

Our Bayern Munich vs Freiburg predictions are based off the visitors have terrible form on the road, which makes the Bundesliga odds very complimentary of Die Roten. To find any value, we are having to back Heynckes’ men to the hilt on Saturday afternoon.

Contrast Freiburg’s torments on their Bundesliga travels and it makes a comfortable Bayern victory the logical conclusion of this game. The hosts are slowly closing in on two years unbeaten at home in the Bundesliga.

Coral offer the best odds on the home side to take all three points without conceding, with Freiburg’s dreadful scoring record on the road the perfect justification for this bet. They have failed to find the back of the net on recent trips to both Bayer Leverkusen and Werder Bremen.

The visitors are winless in their last six consecutive away games in the Bundesliga, with this season not making for happy away jaunts in domestic action. A solitary strike against RB Leipzig has been the only thing to celebrate for the away side, who face arguably the toughest test of their season on Saturday.

Die Roten have kept two clean sheets in their last five home games in the German top flight, but the arrival of Heynckes as a boss once again should kickstart a reaction from Bayern’s squad. The players are playing for their places once again and it should lead to improved form.

Our Bayern Munich vs Freiburg bets look to Arjen Robben to provide some of the inspiration for the home side, with the Netherlands international announcing his retirement from international football this week after scoring twice for Oranje. He looks to be in top shape despite his advancing years, and Freiburg will need to keep a close eye on him.

The 33-year-old winger has two goals in six Bundesliga appearances so far this season but ends with the international break with three goals to his name in a week. Wolfsburg and Mainz have both conceded at the hands of Robben, and Freiburg are set to be the next.

Our Bayern Munich vs Freiburg picks suggest that the Dutchman will be a vital asset for Heynckes, against a visiting side that have struggled defensively of late. Both Leverkusen and RB Leipzig have scored four versus Freiburg this season and 10Bet offer the best value on Robben netting one in another comfortable defeat for them.

To see odds on the next event visit Bayern Munchen vs SC Freiburg odds page.