Manchester City vs Arsenal Predictions: Can Anyone Stop Rampant City? 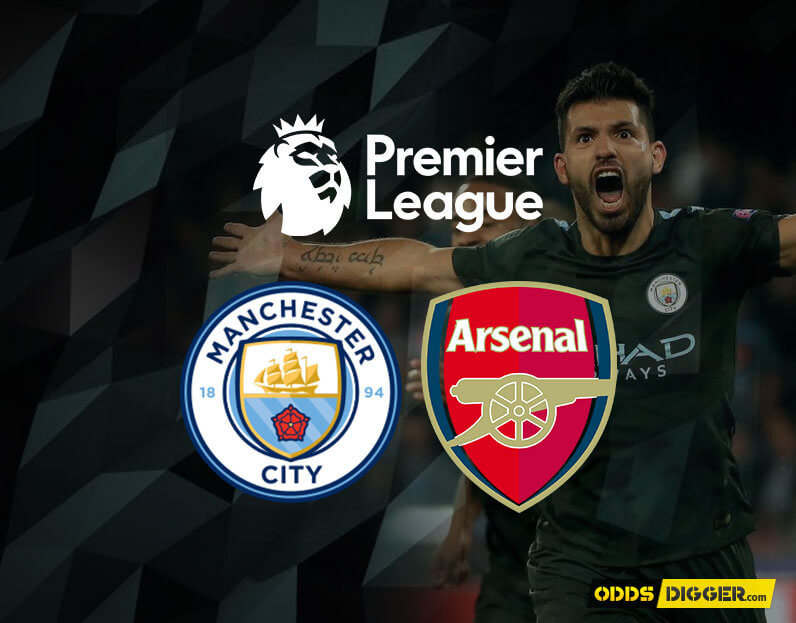 Manchester City are rightly considered one of the best teams in Europe at present, on current form at least. The Citizens have won eight Premier League matches in a row prior to our free Manchester City vs Arsenal preview and have averaged 3.5 goals per game over their set of ten league fixtures. Pep Guardiola has his team playing with a razor sharp cutting edge and unshakable self-belief, which in turn is producing some incredible displays of attacking football.

Our partners: 777Spinslot is a well-known gaming platform that offers great win real money online no deposit rewards and a big variety of games to its players!

The Sky Blues were on Champions League duty before today’s Manchester City vs Arsenal betting tips, recording a phenomenal 4-2 away to free-scoring Serie A leaders Napoli. That result meant that City had won all but one of their sixteen competitive fixtures so far in 2017/18. They look to be in an unstoppable form as they welcome Arsenal to the Etihad stadium on Sunday.

The Gunners have been winning games while everybody’s focus was trained on other clubs and Arsene Wenger’s side have come out on top in eight of their last nine matches. That’s a fantastic return of victories for any team and the Londoners will climb into the top four places if they can become the first team this season to put the Citizens to the sword at the weekend. Wenger has seen his team toppled by the Sky Blues just once in their last ten games against them, a record that adds an interesting edge to the bookies’ Premier League football odds for the clash.

The away team in this week’s free Manchester City vs Arsenal bets have a fabulous record in this fixture, losing just once over ten games against the title favourites. Those extremely positive head-to-head statistics cloud the issue a little. Even though the Citizens are still heavily backed by the bookies to take the points, we are instead focussing on the goal markets. There have been over 2.5 goals in seven of the home clubs’ last eight contests.

Their goal per Premiership game average of 3.5 alone is enough to convince us to delve into the goal markets, but in five of the last historical encounters between our analysed outfits, there have also been over 2.5 goals registered. Each set of players are famed for producing eye-catching open football and with Wenger’s defence unable to set up to spoil, Sunday’s battle is likely to be a case of “we can score more than you” as both teams go for the jugular from the off. We discovered that the odds provided for our prediction by Bet-at-home offer the most value for the bettors using the first of our weekend English football tips.

The second of today’s Manchester City vs Arsenal predictions is largely in the same vein as our call above, but the amazing odds we found at Ladbrokes for this selection were hard to turn down. The Gunners have managed to get their names on the scoreboard in twelve of their last thirteen fixtures. The only blank they drew was in their 0-0 stalemate against Chelsea at Stamford Bridge back in mid-September.

Guardiola’s defenders have been generous of late, keeping just two clean sheets in their last six and one of those shutouts came in the League Cup against Championship leaders Wolves. Wolverhampton were also the only team to stop the Sky Blues from scoring in 2017/18. It’s clear that both teams featured in our betting information are consistent goal getters and quite often goal conceders. Wenger’s rear-guard have been off their game too, they have stopped their opponents from scoring on just one occasion from their last five.

To see odds on the next event visit Man City vs Arsenal odds page.