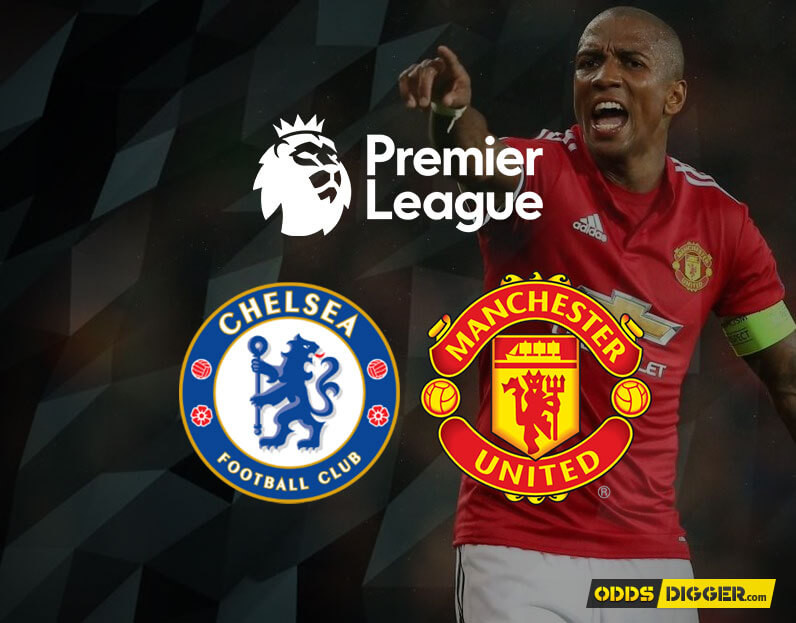 Antonio Conte and Chelsea are rocking a little of late. The Blues have won just three of their last seven matches in the week’s leading up to today’s free Chelsea vs Manchester United preview. The current Premier League champions return of six wins from their opening ten league games can be considered a weak start to their title defence too and already questions are being asked about the Italian manager’s long-term future at Stamford Bridge.

Our partners: 777Spinslot is a well-known gaming platform that offers great win money no deposit rewards and a wide range of games to its customers!

The Red Devils have been efficient in their most recent matches before our expert OddsDigger Chelsea vs Manchester United betting tips. After their unexpected defeat to new boys Huddersfield Town, Manchester United have steadied the ship with three straight wins and three clean sheets. With Paul Pogba and Marouane Fellaini still to return from injury, Jose Mourinho must make do with his current midfield options Ander Herrera and Nemanja Matic once again. Conte must wait to hear if N’Golo Kante can play – at present the French international’s chances are described as “50-50”.

The Blues were trounced 0-3 by Italian side Roma in their Champions’ League group during the week and a defeat as resounding as that is bound to plant a seed of self-doubt in the players’ minds. However, the Londoners have a brilliant head-to-head record against United, losing just once in thirteen clashes with their rivals. Utd got the better of the Pensioners at Old Trafford in April when the sides last squared up to each other, emerging 2-0 winners after a topsy-turvy game. The bookmakers’ latest Premiership football odds suggest that Sunday’s heavyweight bout will be another nail-biting affair.

Usually, in a game of the magnitude of the one featured in today’s Chelsea vs Manchester United bets, Jose Mourinho’s approach is generally one of little risk characterised by compact defending and sporadic attacking. Sunday’s duel at Stamford Bridge is expected to follow the pattern set by United in their 1-0 win at Southampton, their 0-0 draw at Anfield and their 1-0 win over Tottenham Hotspur.

Utd have only allowed four goals past David de Gea in the Spaniard’s ten Premier League appearances between the sticks in 2017/18. Conte’s attackers will be coming up against a solid red brick wall this weekend and may struggle to find any holes to explore in the Red Devil’s defensive structure. There have been under 2.5 goals scored in five of Utd’s last six outings – their style of play often frustrates supporters, but its effectiveness is unquestionable. Betfair lead the way for odds for the first selection in our English football tips today, so we advise you to use that bookie on this occasion.

The away team in our detailed Chelsea vs Manchester United predictions have lost just one of their ten Premiership fixtures since August. They are robust and organised in their defensive third are capable of shutting up shop to spoil the attacks of opposing teams packed with creative talent.

The Blues have failed to win four of their nine matches in all competitions this season in front of their own fans and their lacklustre performances at Stamford Bridge have been a problem since the summer. The Londoners are ranked 11th in the Premier League on home results, collecting just seven points from their five duels there. From a historical point of view, our analysed teams have finished the level in six of their last thirteen meetings, while four of the other games have been decided by a single goal. The evidence suggests that Mourinho can wrangle another valuable point from a difficult fixture on Sunday. Unibet’s prices and odds are unmatched in terms of value for the top of the table face-off.