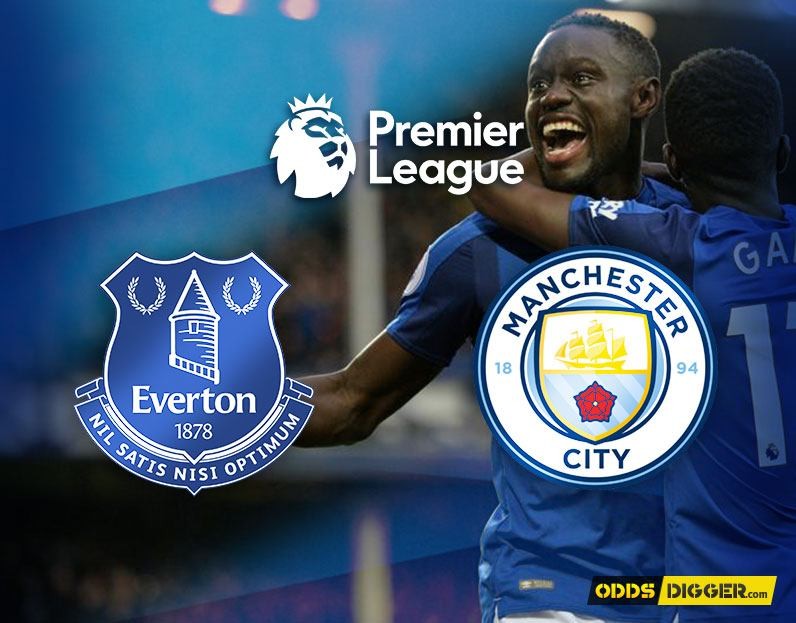 In this week’s free Everton FC vs Man City preview we dissect a fascinating looking Premier League clash between the teams placed 9th and 1st in the division respectively. The hosts no longer have any relegation fears after they strung together a couple of recent victories. This weekend however, they face a side who have been in sensational form for the entire 2017/18 season.

Our partners: 777Spinslot casino gives access to the most beneficial promotional offers in the industry, from new player offers to bonuses, free spins mobile no deposit and free bets.

In the lead up to our Everton FC vs Man City betting tips, the Toffees won back-to-back Premiership matches against Brighton and Stoke. It was the first time that Everton had won successive EPL fixtures since mid-December. Sam Allardyce’s men have only suffered defeat four times in fifteen league games at Goodison Park this term, though on Saturday that proud record is likely to come under serious threat.

Man City are closing in on the Premier League title and Pep Guardiola’s side need only a couple of wins to confirm their status as the new champions. The Citizens are on a four match winning streak in the Premiership and have won six of their last seven in the competition overall. The runaway division leaders are statistically the strongest away team in the league having lost only one of their fifteen contests on the road since August. Keep reading to see our free English football tips this week.

The away side analysed for our OddsDigger Everton FC vs Man City bets enter the vast majority of fixtures as huge favourites no matter who they come up against. The Toffees recent brace of wins will have galvanised their confidence somewhat, though they have won just 50% of their last six league matches in total. The Citizens on the other hand have enjoyed a near perfect league season so far.

Guardiola’s troops have won twenty six of their thirty EPL games in 2017/18 to date, losing just one match in what has been a staggeringly consistent campaign. The Sky Blues haven’t won at Goodison Park since 2015, though that record is likely to improve this week. As we hinted at earlier, the league leaders have been outstanding on their travels this term.

Thirty eight points from a possible forty five on the road is a fabulous return for the champions elect. Only Liverpool have taken maximum points against City this season. The title is within touching distance and Pep Guardiola won’t accept any slipups on Merseyside. We chose Betway Sports to provide today’s Premier League football odds. Their prices for the away victory are the most lucrative around.

The away side’s devastating attacking play had a sizeable impact on the second of today’s Everton FC vs Man City predictions. With eighty five league goals already scored in 2017/18, the Citizens are comfortably the division’s top scorers. They have averaged a mighty 2.8 goals per ninety minutes in the Premiership since last summer.

The table toppers have been goal happy in recent weeks too, cementing their reputation as the league’s most frightening front line. Powered by the clinical finishing of Sergio Aguero, Leroy Sane and Raheem Sterling in particular, the Mancunians have hit the net two or more times in seven of their last nine outings. Away from home, their goal getting power is similarly impressive.

Pep Guardiola’s forwards have averaged 2.3 goals per game on their travels in 2017/18. Crystal Palace stand alone as the only team to stop the Sky Blues from registering a goal this season. The Toffees come into this weekend’s tough game having kept only one clean sheet in their last twelve matches. We’re tipping the away side to have a productive day in front of goal at Goodison Park and we recommend you take the over 1.5 Manchester City goals option using the terrific prices at Sunbets.

To see odds on the next event visit Everton FC vs Man City odds page.