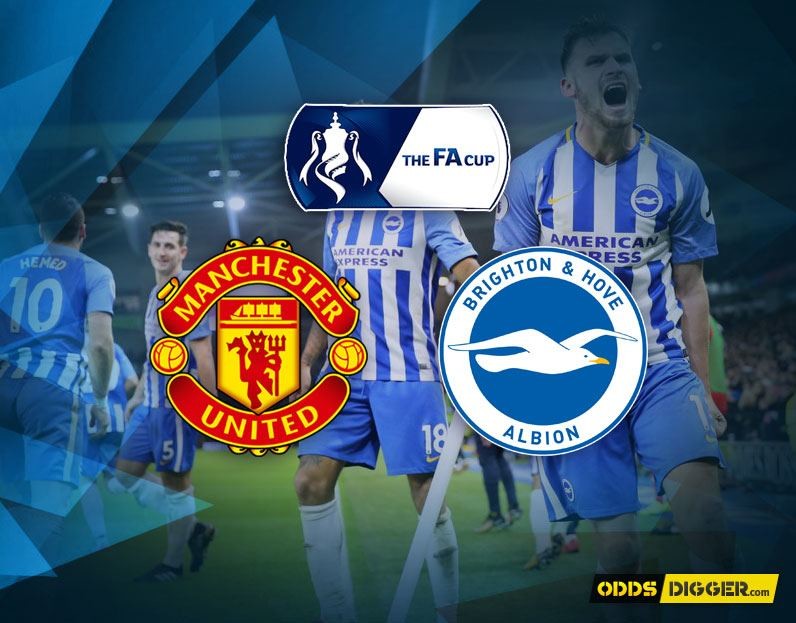 Today’s Manchester United vs Brighton & Hove Albion preview examines one of the pick-out ties of the Quarter Final stage in this season’s FA Cup. With the Premier League title almost certainly heading to their City rivals and chances of Champions League glory looking slim, the Red Devils’ last hope for silverware this year might be the Cup. Utd have lifted the trophy twelve times in their history.

Our partners: 777Spinslot casino gives access to the most interesting offers in the business, from registration offers to bonuses, free spins no deposit online casino and free bets.

The Red Devils have yet to concede a goal in the FA Cup this season, keeping three clean sheets in all three of their fixtures prior to today’s free Manchester United vs Brighton & Hove Albion betting tips. In Round Three, Utd saw off Derby County, beating the Rams 2-0. In Round Four, they put four without reply past Yeovil Town and in Round Five, Romelu Lukaku scored twice in Manchester United’s 2-0 victory at Huddersfield.

Brighton & Hove Albion have enjoyed a relatively smooth passage to this round of the competition themselves, beating Crystal Palace, Middlesbrough, and Coventry City in the Cup thus far. The Seagulls met United in the 1983 Final of the FA Cup. The teams drew 2-2 on the day, though a Bryan Robson inspired Man Utd won the replay by a convincing 4-0 scoreline. Current Manager Chris Hughton will be aiming to be the first Seagulls boss ever to win at Old Trafford. Check out our free English football tips below.

Even though they have had an up and down campaign overall, the Red Devils have been superb defensively at Old Trafford this season. Their outstanding defensive statistics had an enormous influence on the first of today’s Manchester United vs Brighton & Hove Albion bets. Utd have only conceded six times in the Premier League at the Theatre of Dreams so far in 2017/18.

Under Jose Mourinho, Old Trafford has become a fortress again. Utd have only been beaten once in their last forty-nine competitive fixtures there. As we brushed on earlier, Man Utd have yet to concede a goal in this season’s FA Cup and have gone two hundred and seventy minutes without conceding in the competition.

David de Gea has already kept a clean sheet against the Seagulls this season when the teams met in their first of two Premiership encounters for the season back in November. The Seagulls’ form on the road has been sketchy since late 2017 – they have won only one of their last nine away matches in all and they failed to score in six of those contests. The statistical information tells us that the home team are likely to win and keep another clean sheet next week. Betway Sports have the best FA Cup football odds to use with our forecast. Their odds are priced incredibly generously.

Coming into today’s Manchester United vs Brighton & Hove Albion predictions, the home side have scored over 1.5 goals in each of their three 2017/18 FA Cup fixtures to date. They netted two or more goals against Derby, Yeovil, and Huddersfield. Even though Utd would have been expected to win those fixtures comfortably, they have still shown commendable goal scoring consistency.

Mourinho’s men have scored two or more goals in fourteen of their nineteen competitive games at home since last August. They have bulged the net at least twice in 100% of their four most recent outings on home turf too. In Romelu Lukaku, Anthony Martial, Alexis Sanchez, and Marcus Rashford, the Special One has an array of attacking talent to choose from and Utd’s goal threat is always considerable.

The Seagulls travel north having only stopped their opponents from scoring twice in nine away matches. Their overall goals against stats are even worse than that – it’s now one clean sheet in eleven fixtures for Chris Hughton’s goalkeeper. The odds at Betfair for the home side to score over 1.5 goals are well worth your consideration. You won’t find better value anywhere else and a selection at those odds would make a terrific accumulator filler.

To see odds on the next event visit Manchester United vs Brighton & Hove Albion odds page.