Aston Villa vs Barnsley Predictions: Villa to See off Tykes with Ease 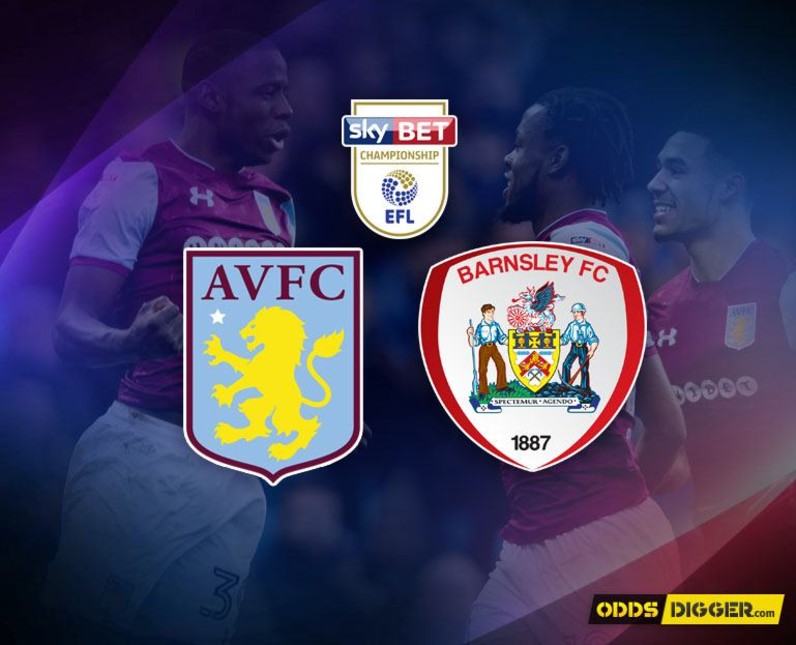 Today’s Aston Villa vs Barnsley preview examines a clash between a Championship promotion chaser and a team looking over their shoulder at the relegation zone. Unsurprisingly, the home side come into the fixture in better shape in terms of recent form and the Villains will be supremely confident of extending their good recent sequence on Saturday.

Steve Bruce’s side come into this week’s Aston Villa vs Barnsley betting tips fresh from three wins in their last four games. Aston Villa would generally be considered to be one of the biggest names in England’s second-highest division and they have played with the authority their reputation demands this season, especially at home. At Villa Park, Bruce’s players have lost just once in thirteen league fixtures, making them the 4th strongest side on their own patch statistically.

Barnsley occupy an uncomfortable 19th position in the table at present and though they are just three points clear of the drop zone, their goal difference should keep their heads above water even if they lose again this weekend. One win in thirteen games is a terrible run of results for manager Paul Heckingbottom, who must be feeling the heat from the boardroom now. However, the Tykes last result will bring some much-needed positivity – they were able to hold runaway leaders Wolves to a 0-0 draw at Oakwell last time out.

Even with the Tykes impressive result against Wolves in their last fixture considered, they are still heavy underdogs in our Aston Villa vs Barnsley bets and the bookmakers’ odds reflect their status as outsiders too. The Villains are generally strong at home, seven wins and five draws from thirteen matches in England’s second city backs that fact up.

The Tykes have won just three of their thirteen contests on their travels since August and it’s their patchy away form that has hamstrung their chances of a higher league placing at this juncture of the season. Furthermore, only Derby County and Leeds have conceded fewer goals at home in 2017/18 than Steve Bruce’s defence, making Paul Heckingbottom’s task all the more daunting.

When the teams met earlier in the season at Oakwell, Bruce’s battlers fought their way to a confidence-building 3-0 victory. A repeat of that scoreline isn’t beyond the Villains and with the amazing Championship football odds for today’s prediction we found at Sportingbet, backing a home win is the smart way to go.

As we explained above, the Villains ran out 3-0 winners the last time the teams in our Aston Villa vs Barnsley predictions took to the field to do battle. Interestingly, the star man that day was thirty-year-old Ghanaian midfielder Albert Adomah. Adomah bagged two of his side’s three goals that day and he has been the main man for Steve Bruce in 2017/18.

The former Middlesbrough star is on something of a barren run at present, having not hit the back of the net in any of his last four appearances. However, Adomah remains the Lion’s top scorer in the Championship this season, having lashed in eleven goals in twenty starts in that competition.

Adomah is on course to surpass his highest ever total of goals for one campaign and needs just once more strike to equal the total of twelve goals that he racked up for former club Middlesbrough in the 2013/14 season. The two goals he got against the Tykes in September should give him the boost he needs to get on the scoresheet again this weekend. The last part of our English football predictions are best backed using 888Sport’s unbeatable odds.

To see odds on the next event visit Aston Villa vs Barnsley odds page.