Arsenal vs West Ham Predictions: Arsenal Have a Brilliant Record Against the Hammers 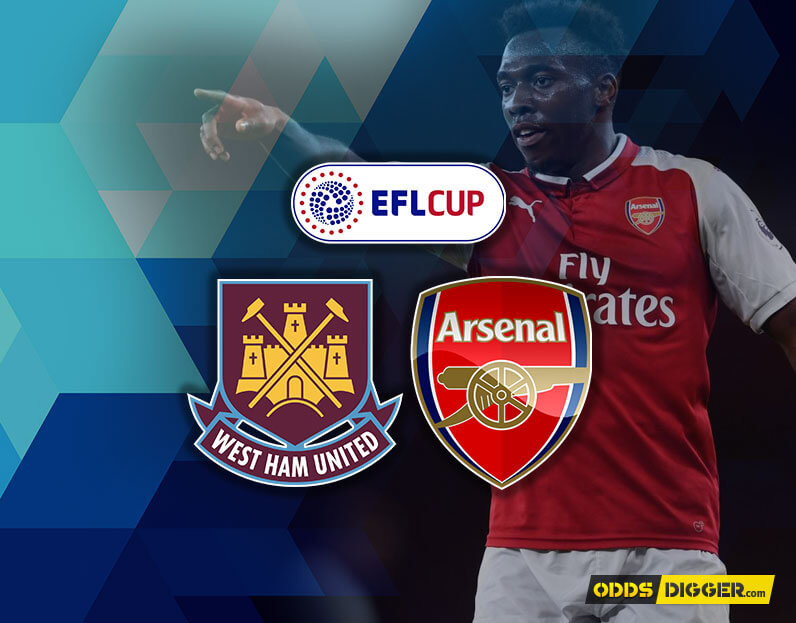 This week’s free Arsenal vs West Ham preview examines an EFL Cup quarter final that is also a London Derby between two of English football’s most famous names. This is a competition that the Hammers have never won, while the Gunners have enjoyed modest success in the League Cup, winning the tournament twice in 1987 and 1993.

The home side under the spotlight in our free Arsenal vs West Ham betting tips have used this season’s secondary cup competition to blood some of their more inexperienced players. Wenger deployed a mix of teenagers and fringe squad players in their earlier round games against Doncaster Rovers and Norwich City. The Gunners scraped past Doncaster with a 1-0 score, but they needed extra time to see off the Canaries, eventually triumphing 2-1 thanks to a double from Edward Nketiah.

Now under the stewardship of David Moyes following the dismissal of Slaven Bilic, West Ham have made it the quarter finals the hard way. They opened their campaign with a well-deserved 2-0 win at lower league Cheltenham, before cruising past a poor Bolton Wanderers side in the third round. After their 3-0 win over the Trotters, they drew Arsenal’s North London rivals Spurs in the next round. The Irons recovered from 0-2 down to secure a stunning 3-2 victory that night. They were helped on their way by a couple of goals from Andre Ayew.

With time running out on Arsene Wenger’s career, he will be desperate to add at least one more piece of silverware to his collection. With the Gunners looking a level below the other top teams in England, winning the EFL Cup might represent his best chance of doing that. With Wenger expected to field a stronger team than usual, his side edge out as favourites to win in today’s selection of Arsenal vs West Ham bets.

The Hammers have an atrocious head-to-head record against their more successful counterparts, winning just one game against them in their last nineteen meetings. Wenger’s warriors won fifteen of those encounters, making them the Irons biggest bogey side in England. With Moyes more focussed on the relegation battle in the Premier League, his players might be lacking the motivation to put up a decent fight at the Emirates. Following our research, we deduced that the latest FL Cup football odds available at Ladbrokes are the most valuable around for our initial offering.

It doesn’t matter if the teams examined in our OddsDigger Arsenal vs West Ham predictions do battle at the Emirates or the London Stadium – games between them quite regularly produce avalanches of goals. Incredibly, in ten of the last eleven clashes between these clubs from the capital, over 2.5 goals have flown in.

There were fifteen goals smashed in in their last three meetings alone, which is an average of five per ninety minutes played. Those enormous numbers are hard to ignore. With Alexis Sanchez and Mesut Ozil looking to put themselves in the shop window before the transfer market reopens in January, they will be keen to show potential employers what they can do. In a do or die knock out a game like this, the teams go for the jugular more often than not. That should ensure supporters have plenty of goalmouth action to enjoy at the Emirates. Unibet’s amazing odds are the perfect prices to use when backing the final instalment of today’s English soccer predictions.

To see odds on the next event visit Arsenal vs West Ham odds page.