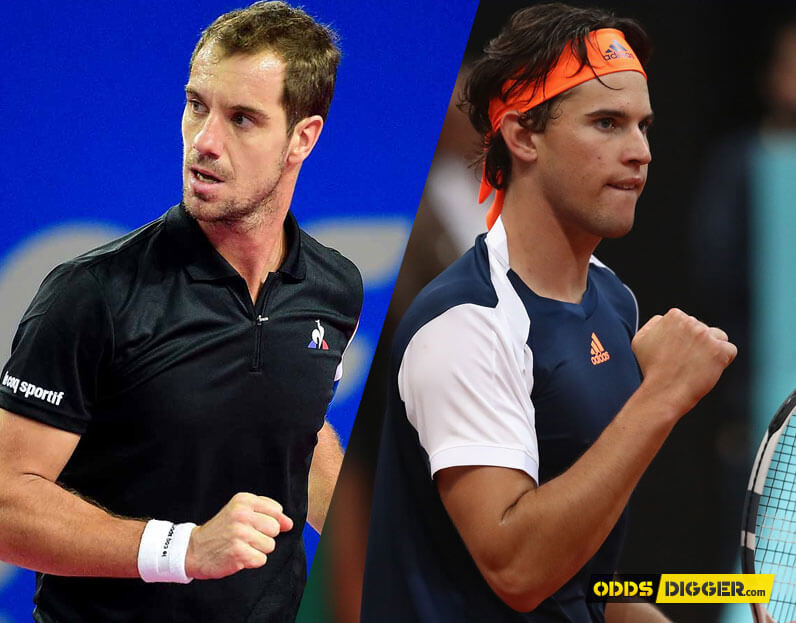 This is the match which is going to be the central event of ATP Vienna tournament this Thursday. Favourite of the crowd, Dominic Thiem faces Richard Gasquet. The host in this tourney eliminated Rublev in the first round with 6-4, 6-3. The experienced French defeated at a veteran Feliciano Lopez 6-2, 6-3. Thursday’s tennis odds give more chances to the younger host, but surprises are possible. For more information about this matchup read our Thiem vs Gasquet preview.

Our partners: 777Spinslot awards its users sign up bonus no deposit slots, promotions for existing members, VIP-benefits and regular battles of spins with amazing bounties.

We really cannot see that the 24-year-old is playing well lately. After being eliminated against Del Potro at US Open, he couldn't win until this Tuesday. His Asian tour was a disaster because he lost already in first rounds of Chengdu, Tokyo and Shanghai Masters. In the game against Rublev, No.6 in ATP rankings had only 44% of primary serve. So we might say that the crisis is not over yet.

The French player chooses his tournament carefully. After being eliminated early at Cincinnati Masters and US Open, he went to Szczecin Challenger and won that championship. The results and performances at Asian tour were quite solid because he lost in the quarterfinals of both Tokyo (Goffin 5-7, 2-6) and Shanghai Masters (Federer 5-7, 4-6). Against Lopez, he controlled the entire game, having a fantastic percentage of points won on the second serve 17/19.

If we examine the recent form and the overall performances of two players, we have to say that Gasquet is going to take at least one set in this match. Thiem isn't looking convincing and his struggle with the first serve, are warning us to be careful when making the final decision on Thiem vs Gasquet tips. Especially after French player's 12 wins on this surface. Take Bet-at-Home for your bookie, since this site has remarkable profits on the suggestion.

This part of Thiem vs Gasquet tips is correlated with the previous one. In a tight and close match like this one, we can expect fierce fight which could ultimately lead to a lengthy event. Gasquet had 3 sets with 12+ games in the last 3 matches. Thiem also, only in three consecutive before the clash with Rublev. Highest odds for the final of ATP Vienna free tennis tips could be found on 10Bet.