Eibar vs Barcelona Predictions: Hosts to Do Damage to Barca 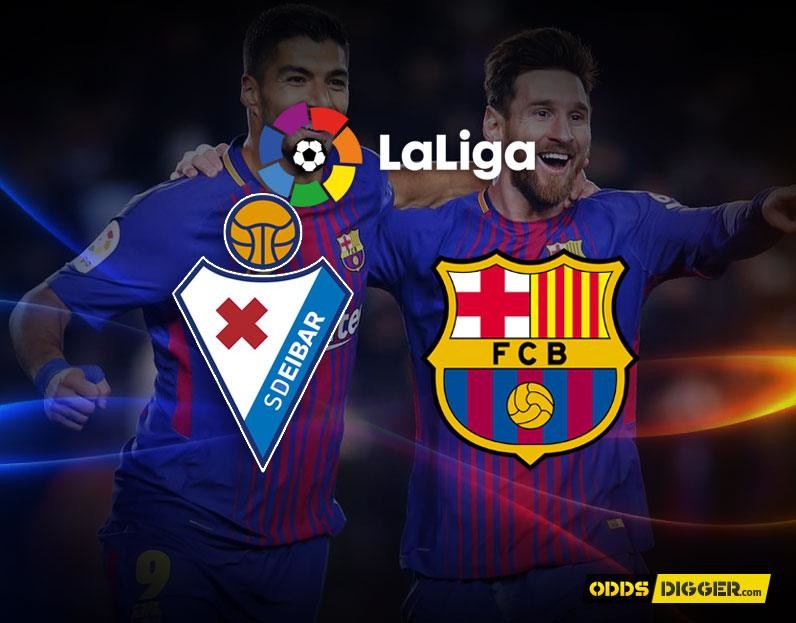 Ernesto Valverde may well have to rotate, ahead of our Eibar vs Barcelona preview and football odds, with Barcelona having to balance their squad’s energy out over three competitions of late: the Champions League, the Copa del Rey, and La Liga.

Our partners: 777Spinslot casino site offers access to the most attractive offers in the business, from welcome offers to bonuses, slot games free spins no deposit and free bets.

Barcelona are still unbeaten thus far in the Spanish top flight, with Valverde well on the way to potentially earning his club a treble in his first campaign in charge at Camp Nou. At Ipurua, however, they face one of their biggest potential banana skins, as Eibar are strong at home.

Our Eibar vs Barcelona predictions back the home side to be able to worry and do some damage to the league leaders, which makes backing goals within our weekend La Liga predictions very tempting indeed.

Given that Ipurua has the smallest pitch in the division, modest facilities, and a crowd of around 5,000 people, paying a visit to this stadium will provide Barcelona with a challenge outside of just facing a very plucky opponent.

Eibar have scored in all but one of their last eight La Liga home games, with only Atletico Madrid managing to come and keep a clean sheet in the Basque country of late. Last time out in front of their own supporters, Mendilibar’s men managed to fire five past Sevilla in an emphatic victory.

Sunbets offer the best odds on both sides being able to hit the back of the net on Saturday afternoon, with Barcelona set to be stretched and harried by the hosts. Given that Barca have a Champions League tie with Chelsea to also keep an eye on, there is a chance that Valverde could rotate quite heavily for this game and leave his unit light at the back.

Barcelona have scored in their last 15 consecutive league away games, and recently they have fired five past Real Betis, four beyond Real Sociedad, and three past Real Madrid. The Blaugrana are definitely in great shape going forward, with Luis Suarez and Lionel Messi in top form.

Our Eibar vs Barcelona bets back this to be an entertaining game, with Eibar set to get the ball forward at pace and attack Barca. They have a lot of quality in wide areas, with the likes of Takashi Inui and Fabian Orellana in excellent form of late. Los Armeros will be unafraid to get at their reputable opponents and try and cause a shock result, just as they did recently versus Sevilla at Ipurua. Their little stadium is something of a fortress during this season.

Unibet offer the best odds on there being four goals or more in this clash, which looks likely given how Barcelona have been firing on the road of late. They’ve scored 13 goals across their last four La Liga away games, and you would have to look all the way back to April 2017 to find the last time that they fired a blank on their travels.

Our Eibar vs Barcelona betting tips suggest that while Barca may be able to blast their way to victory yet again in the Spanish top flight, plucky Eibar’s style and form point towards them providing a real test for the league leaders. Their form at Ipurua speaks for itself, and they have no fear of attacking anyone.

To see odds on the next event visit Eibar vs Barcelona odds page.