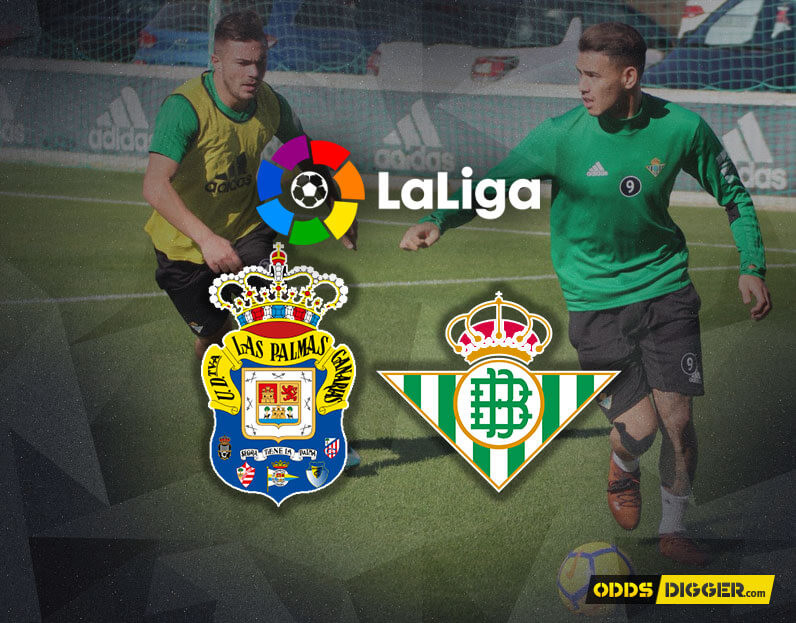 Today’s OddsDigger Deportiva Las Palmas vs Real Betis preview features a pair of La Liga clubs with very different expectations for their respective seasons. Deportiva Las Palmas will be fighting tooth and nail to keep their heads above water in a league where they are one of the favourites for relegation. Their opponents have designs on qualifying for the Europa League for 2018/19, though they will need to move up a level or two to hit that target.

Ahead of today’s Deportiva Las Palmas vs Real Betis betting tips, the islanders look short on confidence and self-belief. They have been beaten heavily quite a few times already this term. The stand-out losses came in a 1-5 loss to Atletico Madrid, a 2-5 loss to Celta Vigo, and a 0-4 loss away to Villarreal. Pako Ayestarán knows he has a real job on his hands to motivate a set of players who could crumble mentally in any given fixture.

Real Betis are one of Spain’s most popular sides, but they have generally struggled to really compete in the top end of the Spanish Primera División. Under Quique Setién, they have forged a reputation as one of the league’s most exciting teams to watch, though the haphazard nature of their defending often leaves their supporters frustrated. Statistically, Los Verdiblancos have some of the worst defensive numbers in Spain’s top flight. To counterbalance that, in Antonio Sanabria, Sergio Leon, and Joel Campbell, they have options and quality in attacking areas.

The home side featured in today’s free Deportiva Las Palmas vs Real Betis bets have been one of, if not the worst club side in the Primera División in 2017/18, but their record against Betis when they visit the Canaries is quite remarkable. La UD have only been beaten once by the club from Andalusia in seven meetings with them at the Estadio Gran Canaria.

They last played them there as recently as the beginning of April – that day they hit four goals in a resounding 4-1 win over Los Verdiblancos. Goals from Vicente Gomez, Kevin Prince Boateng, Jonathan Viera, and Jese made all the difference on that occasion.

With the extra impetus supplied by that great head-to-head record, Pako Ayestarán’s side can secure three crucial points in their battle against the drop. We chose Sportingbet to supply the La Liga football game odds for our prediction. Their prices and offers came out on top when compared to the rest.

Two porous and disorganised defences feature in this week’s Deportiva Las Palmas vs Real Betis predictions. The away defence is particularly hot and cold. Quique Setién’s backline has already conceded four goals against Real Sociedad, six goals against Valencia, and even five goals against lowly Eibar so far in 2017/18.

As we detailed earlier in our preview, the islanders defending has been sub-standard too and their heavy losses to Atletico Madrid, Celta Vigo, and Villarreal provide all the evidence we need to show that they are always likely to concede plenty of goals. They conceded fourteen goals in those three fixtures alone.

The goalkeepers at either end of the pitch, Leandro Chichizola and Adán, should both anticipate having plenty of work to do at the Estadio Gran Canaria. When all the information is digested and considered, backing both teams to score makes perfect sense. When searching for the best value, we found sensational odds at MrGreen for the second part of our Spanish football tips for today.

To see odds on the next event visit Deportivo La Coruna vs Athletic Bilbao odds page.