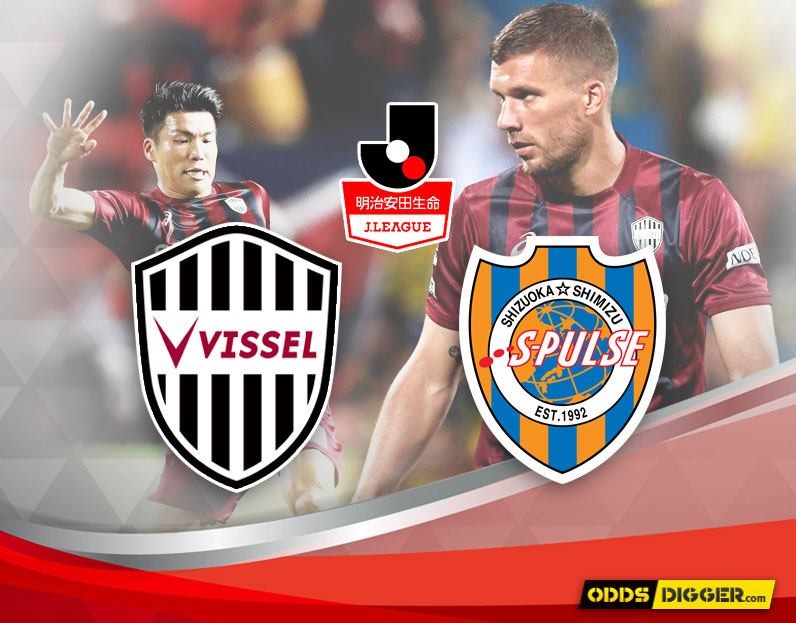 Coincidentally, the teams evaluated for our OddsDigger Vissel Kobe vs Shimizu S-Pulse preview met on the last day of the 2017 J-League season in December, just two competitive games ago. On that occasion at the Noevir Stadium, the away side recorded a convincing 3-1 win to help pull themselves away from the relegation zone on a dramatic afternoon.

Our partners: 777Spinslot casino presents access to the most attractive specials in the business, from sign-up offers to bonuses, free spins no deposit uk casino and free bets.

That result closed out a poor end to the league campaign for the Ushi, who lost all of their last three J-League contests. In fact, they haven’t won any of their most recent five matches in the run-up to today’s Vissel Kobe vs Shimizu S-Pulse betting tips. Takayuki Yoshida will be looking to get more from his attacking players – collectively, the Vissel Kobe squad has netted only five times in their last five games in total.

Shimizu S-Pulse held last year’s runners up Kashima Antlers to a 0-0 draw on the first weekend of the new Japanese season. The result was a fine start to their 2018 adventure for a team who avoided being relegated on the last day of the 2017 campaign. S-Pa were lucky to stay up following a dismal final few months of the season. They only won one of their last ten fixtures and that victory incidentally came against their upcoming opponents this weekend.

To aid us in adding viable selections to our free Vissel Kobe vs Shimizu S-Pulse bets, we have a very recent fixture between the featured teams to analyse. The clubs did battle just two competitive fixtures ago on the final day of the 2017 season. S-Pa had everything to play for on December 2nd and they used that extra motivation to force a 3-1 win at the Noevir Stadium.

The home side once again face S-Pa at an inopportune time. Kobe have yet to shake off their disappointing end to 2017, though their 1-1 draw at Sagan Tosu last week should go some way to rebuilding their confidence. Their opponents this week are still on a high having maintained their top-flight status at the death last year and the point they gained at home to a strong Kashima Antlers side last time out should add a further boost to their morale.

S-Pa’s 3-1 victory over their hosts is still very fresh in the minds of their players and they should be able to use that result as a blueprint for success again. I’m tipping the away team to avoid defeat and the best J-League football odds we could find for that double chance selection can be found at 10Bet. Their prices emerged top of the pile for value.

We wind up today’s Japanese football tips and Vissel Kobe vs Shimizu S-Pulse predictions by advising an option from the bookmakers’ goal markets. The home side have had deep fractures in their defence for a sustained period now. It’s worth noting that they haven’t kept a clean sheet in any of their last nine domestic outings.

The visitor’s defensive numbers are equally unimpressive – they have stopped their opponents from scoring just five times in their last eighteen matches in all competitions. In 2017, S-Pa had the fourth worst goal concession record in the J-League, shipping fifty-four goals in their thirty-four fixtures in the competition.

The teams’ head-to-head record at the Noevir Stadium also throws up some intriguing statistics. In each of their last five meetings in Suma-Ku, both teams were able to get their names on the scoreboard. With each club united in their defensive frailty at the moment, goals at both ends on Saturday are extremely likely. We unearthed some fabulous odds to match our prediction at 888Sport. We recommend checking out what they have to offer.

To see odds on the next event visit Vissel Kobe vs Shimizu S-Pulse odds page.