Chievo Verona vs Sassuolo Predictions: Two Out of Sorts Teams Face Off 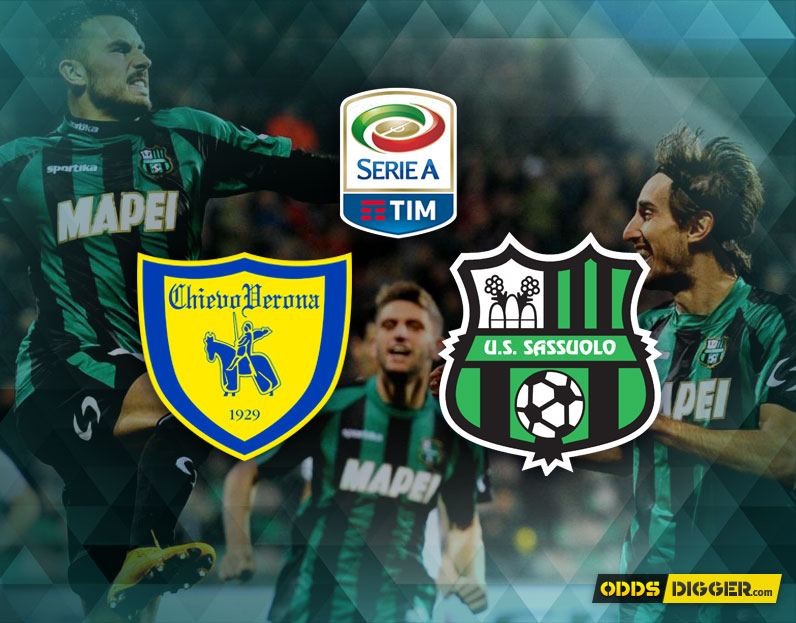 Two of Serie A’s most out of form teams are examined in today’s Chievo Verona vs Sassuolo preview. The sides have just one win between them in their last sixteen fixtures combined, so it’s imperative that they start to add some points to the board to avoid being sucked into an unwanted relegation dogfight.

Our partners: 777Spinslot casino presents access to the most attractive special offers in the industry, from new player offers to bonuses, free spins on starburst no deposit mobile and free bets.

The home side have been beaten five times in six coming into our selection of Chievo Verona vs Sassuolo betting tips, and even though there is still a five-point cushion between them and the relegation places, Chievo Verona will be looking worriedly over their shoulders. The Gialloblu have won only once in thirteen overall since the end of November. To add further to their misery, they have failed to score in four of their last five fixtures.

Sassuolo are without a victory in eight as they tumble ever closer to the drop zone. The Neroverdi lost four of their most recent five contests, conceding a whopping fifteen times in the process. Manager Giuseppe Iachini has at his disposal the worst attack in Serie A – his players have only scored fifteen times in the league this season in their twenty-six games in the division, which is comfortably the lowest total in the competition.

Each of the clubs featured in our free OddsDigger Chievo Verona vs Sassuolo bets have been playing really poorly for quite some time. The home team have won only once in thirteen overall, though they can at least call upon a passable home record ahead of what should be a winnable fixture.

The Gialloblu have only tasted defeat five times in their thirteen Serie A fixtures at the Stadio Marc'Antonio Bentegodi in 2017/18, which is almost a respectable record given their league position of 14th. Their opponents this weekend have already lost eight of thirteen games on the road in the league, though it’s the nature of their most recent defeats that tells the most compelling story.

The Neroverdi lost 0-3 at home to Atalanta, then they were trounced 0-7 at Juventus, Bologna turned them over narrowly 2-1 before Lazio dished out another convincing defeat, beating them 3-0 at the Mapei Stadium-Città del Tricolore. Those heavy losses will be difficult to recover from and the subsequent damage to their confidence should have a huge effect on the outcome of this weekend’s tie.

In addition, the home side have beaten the Neroverdi in two of their last three games against them. You can back the home team to win again using the superb odds we found at Sportingbet. They are some of the best Serie A football odds around.

The away team’s paper-thin confidence has also had a hefty influence on the closing entry in today’s Italian football forecast and Chievo Verona vs Sassuolo predictions. The home outfit will be looking to capitalise on any weakness in their visitors’ armour and they will take heart from some of the recent statistics from Sassuolo’s most recent games.

The Neroverdi conceded inside the first fifteen minutes of three of their last four defeats against Juventus, Bologna, and Lazio respectively. Alex Sandro hit the net for Juve after just nine minutes in Turin, Andrea Poli scored after only twelve minutes for Bologna and Sergej Milinkovic Savic needed just seven minutes to score for Lazio last week in their 3-0 win.

Having watched three teams score so early against the Black and Greens, Rolando Maran will call on his players to start in similarly fast fashion. The odds offered by William Hill for there to be a goal scored inside fifteen minutes again are very generously priced, so take them while they are still available.

To see odds on the next event visit Chievo Verona vs Sassuolo odds page.