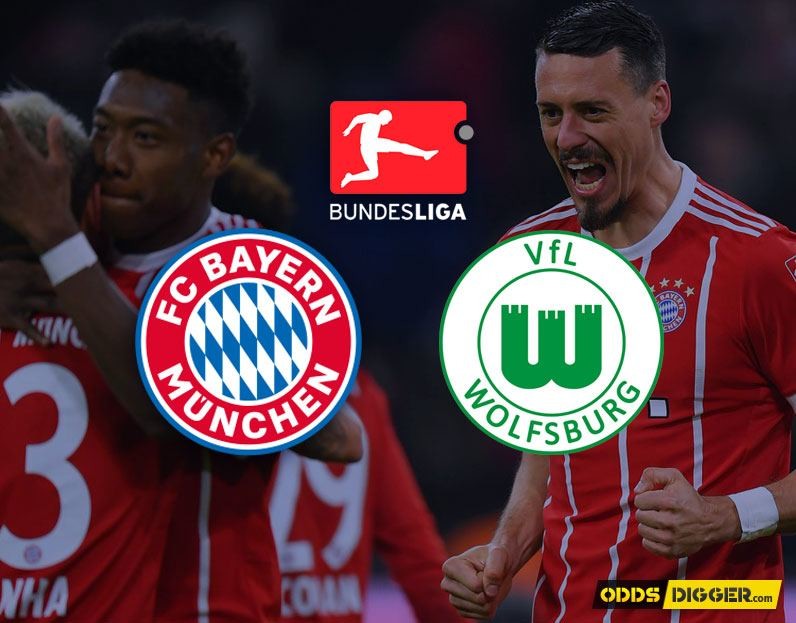 In our VfL Wolfsburg vs Bayern Munchen preview this week, we dissect what looks a mismatch on paper between one of the Bundesliga’s relegation candidates and the club looking to secure their sixth successive league title. The Bavarians are sixteen points clear of RB Leipzig in second spot and really, it’s only a matter of time until they are confirmed as champions.

Our partners: 777Spinslot casino presents access to the most interesting special offers in the business, from welcome offers to bonuses, online slots free spins no deposit and free bets.

Die Wölfe enter this weekend’s contest and this week’s VfL Wolfsburg vs Bayern Munchen betting tips with a poor recent record. VfL Wolfsburg have picked up just one win in their last six ahead of the visit of Germany’s best team. At the Volkswagen Arena, they are on a winless run of three having lost to Eintracht Frankfurt and drawn with Leipzig and Stuttgart. Martin Schmidt’s side have drawn twelve league matches this season which is more than any other club in the division.

Bayern Munchen have been imperious since last October, winning twenty-two of their twenty-three fixtures since then. Der FCB have now won nine Bundesliga matches on the spin since their shock 1-2 loss at Gladbach in late November. Their massive lead at the top of the table might impact their motivation a little, but the sheer quality in their squad allows them to win most domestic German games with relative ease. Unsurprisingly, Jupp Heynckes’ side have scored the most and conceded the fewest goals in 2017/18.

First up in today’s VfL Wolfsburg vs Bayern Munchen bets is an outright result prediction. We are tipping the away side to add three more Bundesliga points to their already impressive total this weekend. Even though the teams drew 2-2 when they met in Munich in the reverse league fixture between the sides in September, Der FCB won the six games between them before that.

The Bavarian big hitters have rattled the net twenty-four times in their last seven clashes with the club from Lower Saxony. In fact, VfL have only beaten their more illustrious opponents once since 2006. Of course, their respective recent fortunes are much more relevant to this week’s match and Bayern lead the way there too.

Heynckes’ side are looking to win their tenth Bundesliga match in a row at the Volkswagen Arena this week and they travel to face a team who haven’t won on home soil in three attempts. Everything points to a comfortable away win on Saturday, and you can back our opening Bundesliga football forecast using the odds we uncovered at StanJames.com. The prices there give you the highest returns for your stake.

Clinical Polish striker Robert Lewandowski is under the microscope in the second of our OddsDigger VfL Wolfsburg vs Bayern Munchen predictions. The centre forward has once again been firing goals in from all angles in 2017/18 and has hit nineteen goals in nineteen Bundesliga appearances so far.

The ruthless attacker, who was signed for just €4.8m in 2010, has smashed in five goals in his last five outings alone to keep his hot streak going. However, the biggest reason for his inclusion in today’s selection of tips is his sensational individual scoring record against Wolfsburg over the past few years.

Lewandowski has scored eleven times in his last seven appearances against VfL. The twenty-nine-year-old will also be looking to extend his great scoring run at the Volkswagen Arena, where he has scored three times in his last two visits. Lewandowski is always a good bet to score and you can find the best German football odds for him to bag a goal anytime this weekend at Unibet.

To see odds on the next event visit VfL Wolfsburg vs Bayern Munchen odds page.