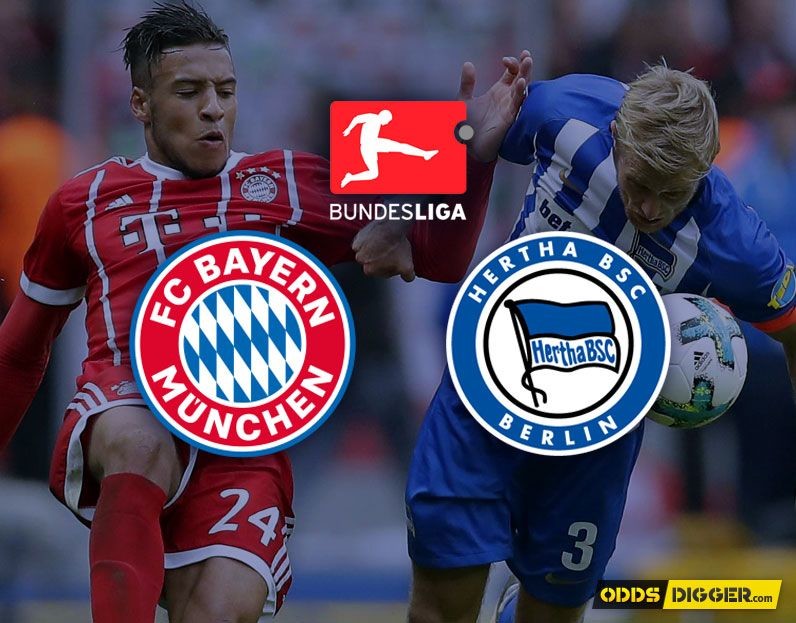 The Bundesliga takes centre stage in today’s free Bayern Munchen vs Hertha BSC preview as the current champions and runaway leaders take on a sleeping giant from the German capital. Der FCB are coasting to another league title this season and at the time of writing, they sit a full eighteen points clear of the chasing pack at the table’s summit.

Our partners: 777Spinslot casino presents access to the most interesting specials in the business, from sign-up offers to bonuses, online casinos with free spins no deposit and free bets.

As usual, FCB are dominating the German domestic scene and they have won an incredible fourteen out of fifteen league matches prior to today’s Bayern Munchen vs Hertha BSC betting tips. However, their monopolisation of the Bundesliga means that continental glory is the only real measure of any great Bayern Munchen side. The Bavarians are looking to secure their sixth straight league title this year.

Hertha BSC haven’t had the best of times in 2018 so far. Die Alte Dame’s impressive 2-0 win at Leverkusen was their first victory of the New Year having gone four matches without a win since January 1st before that. Even though the Berliners sit in 11th spot, the European qualification places are still within reach due to the close nature of the competition. A win for Pal Dardai’s men next week could launch them to as high as 7th position.

As always with Bundesliga matches involving the champions, finding Bayern Munchen vs Hertha BSC bets of value is a tricky task given the respective levels of the teams involved. Der FCB have won ten of their eleven league fixtures at the Allianz Arena in 2017/18, drawing the other one.

They are the top scorers in Germany’s top flight by some distance too having scored fifty-three times already in just twenty-two matches. The Bavarians scored eleven times in their last three outings at home alone, which is an indicator of their tremendous attacking strength.

The champions have dominated this fixture since 2009, winning eleven of their thirteen meetings with the club from the capital since then. Jupp Heyncke’s men look unbeatable at present and they are expected to dominate against Hertha from the off next week. The Bundesliga football odds this week for an outright home win aren’t worth your time, but you can push the odds in your favour by taking the half time/ full-time home win option at Sunbets, whose prices are second to none.

The second of today’s free German football betting tips and Bayern Munchen vs Hertha BSC predictions also focuses on the overwhelming power of the home side. The Bavarians have scored an incredible thirty-four goals in their eleven Bundesliga home contests since the season kicked-off.

That breaks down to an average of just over three goals scored per ninety minutes at the Allianz Arena. In addition, if we take a look at Der FCB’s recent run of games, we can see an easily identifiable pattern of large goal-scoring numbers. In eight of their last nine matches, over 2.5 goals were registered.

In the champion’s most recent four fixtures, a total of eighteen goals flew in. That works out at a huge average of 4.5 goals per game. With Die Roten looking certain to claim the points at the Allianz Arena, the only real question is how many times can they score? We’re expecting them to test Rune Jarstein in the visitor’s goal plenty of times next week, so backing the home win and over 2.5 goals is the right way to go. At Betfair you’ll find the best odds in terms of value and choice, so make sure to check out what they have to offer.

To see odds on the next event visit Bayern Munchen vs Hertha BSC odds page.