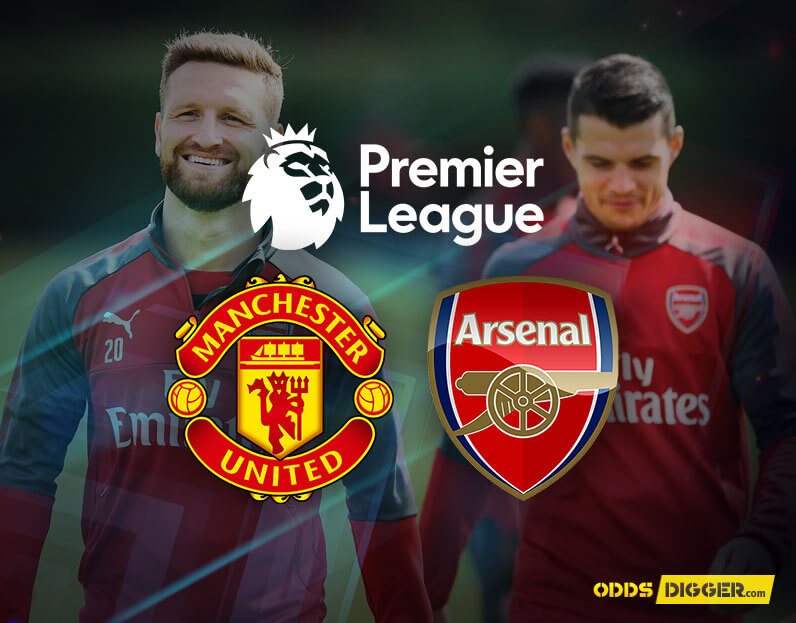 There have been some titanic clashes between Arsenal and Manchester United over the years and Saturday’s evening kick-off at the Emirates Stadium promises to be another mouth-watering contest. Today’s OddsDigger Arsenal vs Manchester United preview highlights the fact that the visitors are still the most likely of the pair to challenge Manchester City for the Premier League title. Manchester United have qualified for the knockout stages of the Champions League with ease and with the return of Zlatan Ibrahimovic and Paul Pogba from injury, Jose Mourinho has arguably a bigger depth of squad and better attacking options than his Arsenal counterpart Arsene Wenger.

Our partners: 777Spinslot awards its users a no deposit bonus keep what you win uk, promotions for existing players, VIP-benefits and regular promotions with fantastic prize pools.

Ahead of today’s Arsenal vs Manchester United predictions, we highlight Manchester United’s inconsistency on the road in the Premier League but suggest that they are more than capable of overcoming it. Losses at Huddersfield Town and Manchester City, plus draws at Liverpool and Stoke mean they dropped 12 points from a possible 18 on the road in their first six attempts. In contrast, Arsenal won each of their opening six home games, scoring at least twice every time, including when taking the scalp of Tottenham.

Our Premier League football tips suggest that Manchester United can end their patchy away form with victory at the Emirates. Arsenal have beaten the Red Devils on the last two occasions at The Emirates but you have to go as far back as May 1991 to find three successive home victories against them. In truth, Arsenal’s impressive home record this season has been padded against lesser sides. Only Tottenham – who struggled with an unfit Harry Kane and an ill Dele Ali – presented what can be considered a serious test.

It is also fair to say that United don’t have a great recent record at Arsenal, having won on just four of their last 10 visits. Mourinho will set out to stymie Arsenal’s attacking threat and that will be helped by the return of Eric Bailly, who has looked to be the glue that holds the defence together.

Our Arsenal vs Manchester United betting tips suggest that Manchester United’s attacking options, with Anthony Martial, Marcus Rashford, and Ibrahimovic all fit, and a strong spine with Pogba and Bailly instrumental, look a formidable force. We look for the visitors to gain an increasingly rare win at the Emirates and Bwin offer realistic odds for this to occur.

Games between this pair invariably produce goals. In six of the last 19 meetings at Arsenal, both sides have scored and while Manchester United have been held scoreless on their last two visits, they have never gone three consecutive trips without netting at least once. Despite criticism of the negative tactics away from home by Mourinho’s men, they have failed to score on just two occasions in their opening six road games – at Chelsea and Liverpool. Given an almost fully-fit squad, the latest football odds suggest the visitors are worthy of backing to score at least once.

Arsenal’s tally of 15 goals in their opening six home games – albeit against lesser opposition – means they can be relied upon to net at least once. Therefore, one of the more enticing Arsenal vs Manchester United bets is for both sides to score. StanJames are on the money with their offer and we should take advantage.

To see odds on the next event visit Arsenal vs Manchester United odds page.