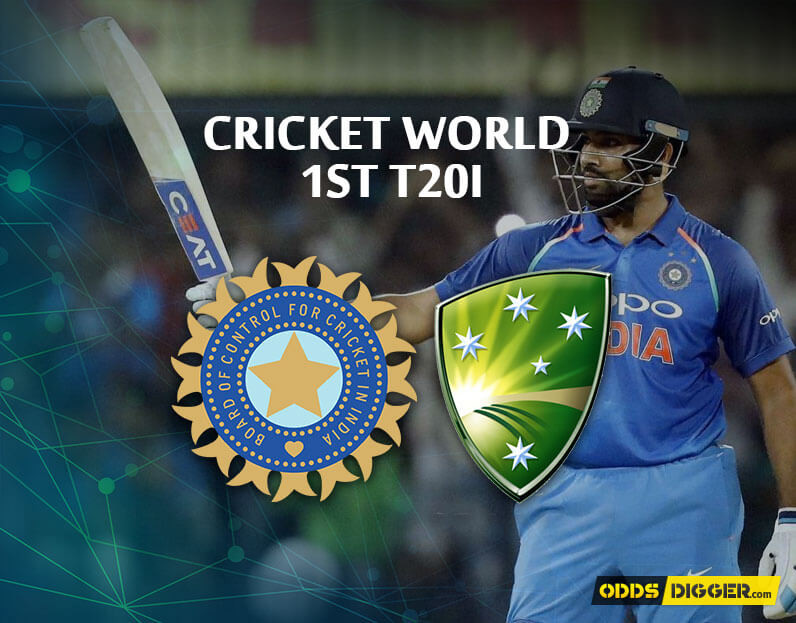 Australia’s difficult time in India looks set to continue as they face off in the three-match T20i series. India dominated the five-match ODI series and will look to carry that on with success in the shortest form of the game. Both sides will be hoping a series win can improve their rankings with India and Australia seventh and fifth respectively. Australia will be hoping they can generate some momentum before they welcome England to their shores for a hotly-contested Ashes series. India meanwhile will want to keep their strong run of form going in this key three match series.

Our partners: 777Spinslot is a well-known gaming platform that provides great no deposit slots uk rewards and a wide variety of games to its users!

Looking ahead to our India vs Australia prediction, we look at how the match will likely play out. Our cricket betting tips are for India to continue their dominance and win the first T20i against Australia. India have been so dominant in the recent ODI series, it is hard to see them relenting and will want to improve their ranking as they build towards the T20 World Cup in 2020. The hosts will be heavily reliant on Rohit Sharma, Virat Kohli and Shikhar Dhawan with the bat, and the veteran Ashish Nehra and Bhuvneshwar Kumar with the ball. Australia meanwhile, have David Warner and Aaron Finch to score big runs at the top of the order, while leg-spinner Adam Zampa will look to continue his development with the ball. Zampa will be ably supported by Pat Cummins and Nathan Coulter-Nile, who will look to draw some seam movement out of the dry Indian wickets.

India have the benefit of home advantage and are playing against a side severely lacking in confidence, having been well beaten in the ODI series. They have won the last two T20 International series between the two sides and have enjoyed a sustained period of dominance over their counterparts. They have never played Australia at the JSCA International Stadium, Ranchi but have also never lost a T20 against the visitors in India. Virat Kohli became the fifth Indian player to 50 T20i matches in the recent series with Sri Lanka and is his country’s leading run scorer with 1,831 runs. Kohli also has the highest batting average in International T20 with a career average of 53.85 and will be hoping to guide his side to victory at a great price with bookmakers Betsson.

David Warner has become an integral part of the Australian lineup in all formats and will want to put in a great performance in the three-match T20i Series. Warner is his country’s leading run-scorer with 1,686 career T20i runs. He is placed eighth overall on the all-time run scoring list, with only Virat Kohli (1,831) above him in the list to feature in this series. Warner is in fantastic form, scoring a majestic 124 in his 100th ODI, and in doing became only the eighth player to mark the career milestone by bringing up three figures. He is also the first Australian to do so, surpassing Geoff Marsh’s 82 in his 100th ODI. One thing Warner will be looking to tick off his career bucket list will be bringing up three figures in a T20 International. His high score of 90* remains his best performance in 63 T20s and has not come close since his 77 from 40 balls against South Africa, back in March 2016.

To see odds on the next event visit India vs Australia odds page.