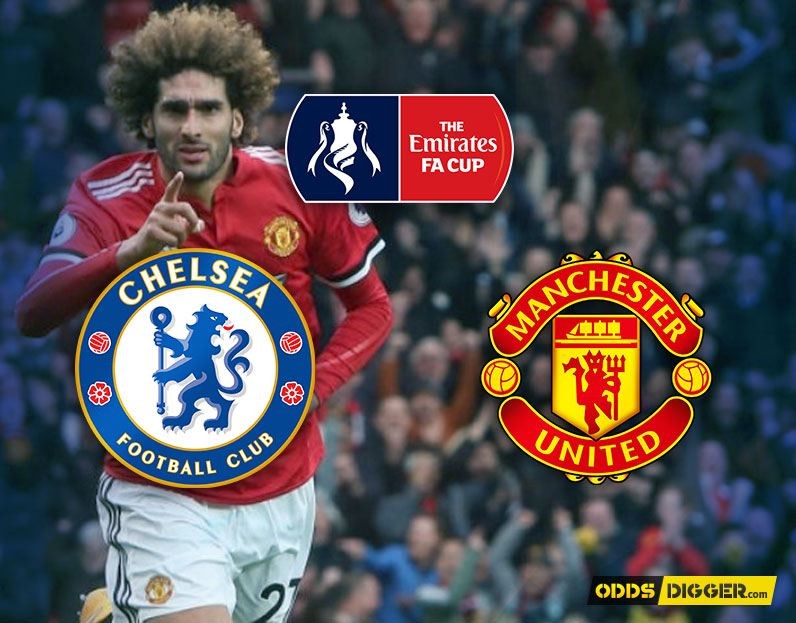 Today’s OddsDigger Chelsea vs Manchester United preview analyses the 137th FA Cup Final at Wembley between two of the competition’s most successful clubs. The Blues have won the cup seven times in their history, though they haven’t lifted it since 2012. The Red Devils were FA Cup winners just two years ago and they have won it twelve times in total.

Our partners: 777Spinslot casino gives access to the most lucrative specials in the industry, from welcome offers to bonuses, free spins casino no deposit and free bets.

Ahead of this week’s Chelsea vs Manchester United betting tips, the Blues have been in solid if unspectacular form. Chelsea haven’t lost in seven as we approach the final set of Premier League fixtures, though goal scoring is still proving a real problem for Antonio Conte’s side. The Londoners’ route to the Final was relatively straightforward, with wins over Norwich, Newcastle, Hull, Leicester, and Southampton earning them a place at Wembley next week.

Manchester United have had the strangest of seasons. 2nd place in the Premiership has been secured, though the Mancunians are frustrating everybody with their dull style of play. Man Utd had to overcome Derby County, Yeovil Town, Huddersfield Town, Brighton, and Spurs to earn their place in the Final. The football betting odds for next weekend’s clash at Wembley price United as favourites to win, though they also suggest the game will be a close contest.

The FA Cup Final will be Antonio Conte’s last game in charge as manager of the Pensioners and with his players keen to give him the perfect send off, we make the Blues favourites to win in our Chelsea vs Manchester United bets. The Blues have a terrific record historically in this fixture, losing just two of their last fifteen meetings with Utd in total. MUFC did beat the West Londoners 2-1 the last time the sides played, however.

Nevertheless, the Blues will take to the pitch at Wembley in the midst of a lengthy unbeaten run. Seven fixtures without defeat is a sequence that can generate some serious momentum. In contrast, the Red Devils have won just 50% of their last six matches and they have looked lethargic and devoid of ideas for weeks.

Antonio Conte will be desperate to add some more silverware to his CV and we’re tipping him to come up with a tactical master plan to get one over on Mourinho. Our FA Cup match predictions recommend you back the Chelsea win next weekend. The odds available for that selection at Betfred are wonderfully priced and we advise you take them.

With both teams featured in our Chelsea vs Manchester United predictions struggling to create and score chances in the final third, we are presented with a great chance to take advantage of their profligacy. The Blues have averaged just one goal per game in their last three outings. They beat Swansea 1-0, Liverpool 1-0 and drew 1-1 with Huddersfield Town most recently.

The latest FA Cup odds tell us that the bookmakers also expect a low scoring match next week, and that it is likely to be decided by a goal either way. Much will hinge on the availability of Romelu Lukaku for United, though even with the Belgian in the team, the Red Devils don’t offer a whole lot of attacking threat. Mourinho’s men have only scored more than twice in a game once in their last eleven fixtures.

In addition, seven of the last thirteen meetings between these famous clubs have had fewer than 1.5 goals scored in them. When the sides met earlier in the season at Stamford Bridge, a solitary Alvaro Morata goal was the difference. Our free expert English football tips are forecasting another tight battle at Wembley in the Cup Final and the under 1.5 goal market looks a great bet. Our research shows that Betway Sports offer punters the most value in that market.