The Vuelta a España is all set to kick off for another campaign, as the world of cycling gets to welcome the last of the three Grand Tours in the 2017 cycling campaign. Starting on August 19, the race will be running for a couple of weeks before its conclusion on September 10. This will be the 72nd edition of the Vuelta a España, which was first organised back in 1935. It is regarded as one of the important cycling events in the world alongside in the Tour de France and the Giro d’Italia. 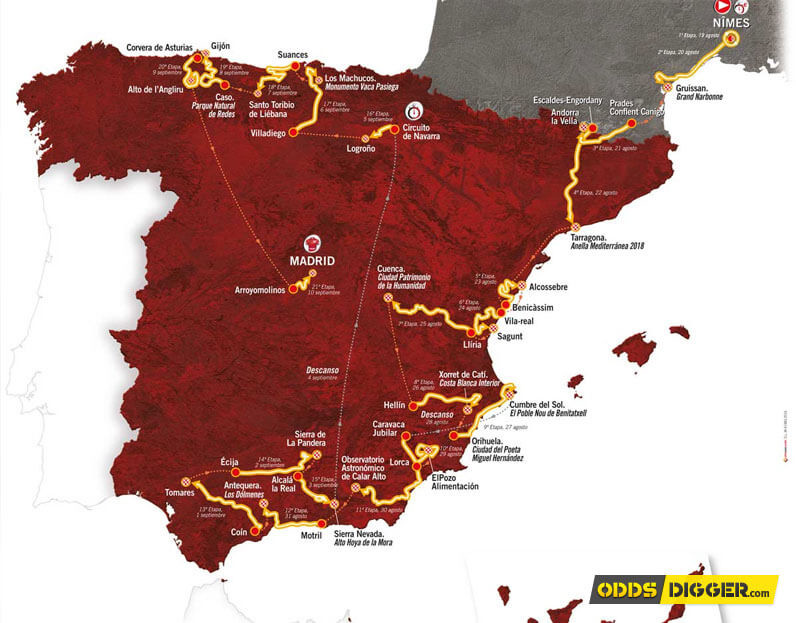 The La Vuelta has been a constant feature in the world of cycling – apart from the World War years. Despite its long history, the La Vuelta 2017 will be registering a couple of firsts even in the 72nd edition. The race will be starting in France and concluding in Madrid.

The race organisers will do the route map for the La Vuelta 2017 event back in January. The event kicks off with a team trail at Nimes and concludes with a flat stage event in Madrid. The total distance of the event will be just under 3,300 km.

Key Vuelta Stages You Must Watch 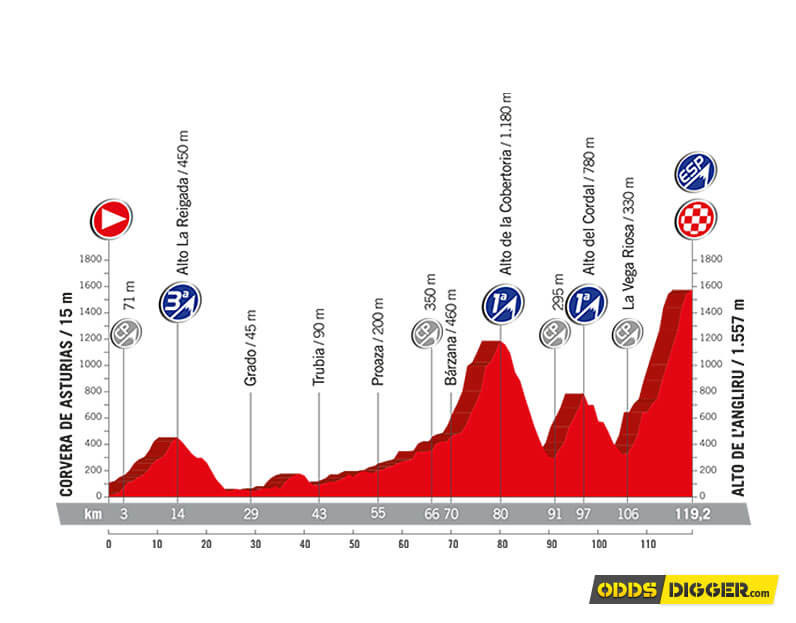 Distinctive Aspects of the Race

This will be the first time that the La Vuelta has opened on French soil. This race traditionally starts in Spain, and the 2017 edition will only be the third time that it has started on foreign soil. The race features 50 summits and 42 km of team time trial. Only 13.8 km will be the individual time trial. There are only two rest days in the race. OddsDigger will provide extensive details to make this La Vuelta preview comprehensive.

Nimes has a history going back to the Roman era. It is part of the UNESCO World Heritage sites. Even though it is in France, there is a law of Spanish influence in every aspect of life here. The numerous architectural strengths of the city go back to the 18th century, and they will kickstart the event.

The Vuelta 2017 will be crossing borders to host the departure for only the third time in the history of the event. The last times Vuelta crossed borders were in Lisbon 1997 and Assen 2009. The 2017 event will also be the first time France hosts the departure of this event. Furthermore, two stages of the 2017 race will take place exclusively in France. 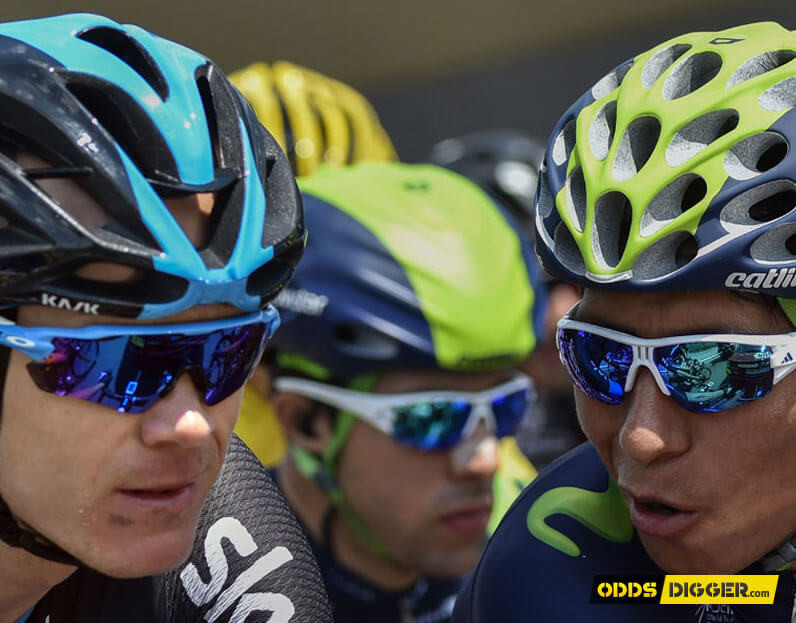 The likes of Chris Froome, Alejandro Valverde, Esteban Chaves, Fabio Aru, and Nairo Quintana will be among the riders competing for the red jersey.

Pure Sprinters vs Climbers: Who's Got Advantage?

The route map for the 2017 edition may be tough on the pure sprinters. Most of the Vuelta odds are focusing on climbers like Chris Froome and Alberto Contador. The presence of 50 summits and just 13.8 km of individual time trials mean that the sprinters do not have much of a role to play in this event. The 42 km team time trail also provides little scope for a major impact from the sprinters. It is not surprising that most Vuelta 2017 predictions seem to favour the climbers.

The Battle for the Red Jersey: Will Nairo Quintana Win Again? 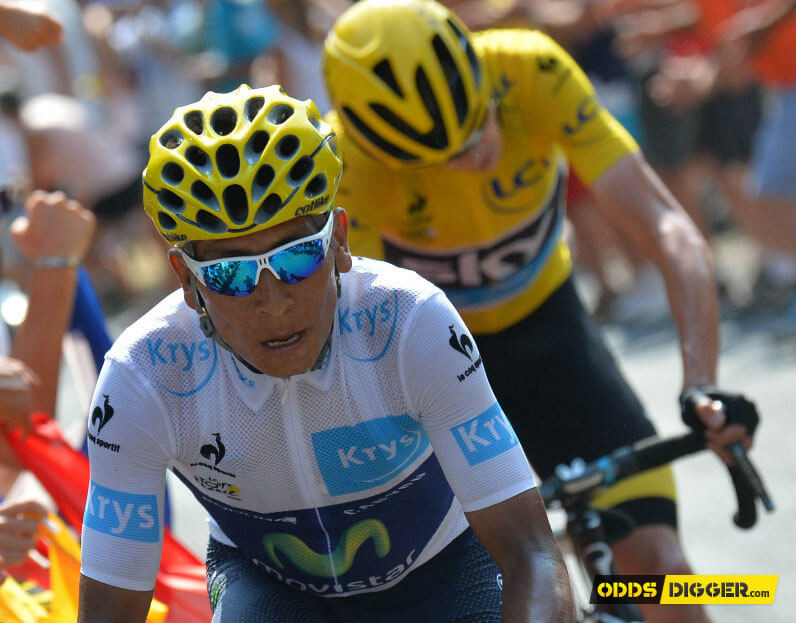 Nairo Quintana managed to win the red jersey last year by finishing ahead of Chris Froome and Esteban Chaves. He managed to come second in the Giro d’Italia, this showing that his touch has not deserted him. Yet, the challenge the rivals is far greater with Froome, who is seeking a first general classification win in the Vuelta results after having dominated the Tour from de France in recent years.

Froome has only managed to win three individual stages and one team time trial event when it comes to the Tour of Spain. Quintana missed the Route du Sud due to fatigue and the need to concentrate on the Tour de France. It remains to be seen if he is still fresh for the final Grand Tour of the season.

The 2017 Vuelta betting tips largely focus on the three riders who will step onto the podium. Team Sky are once again coming into the event on a strong run of form, but they have tended to dominate the Tour de France more than the Vuelta a Espana. Movistar have failed to feature on the podium only once since 2012.

Chris Froome is the favourite this time, leading the odds table at 13/8, while Richie Porte is second at 2, and Nairo Quintana is 15/2 to win. Alberto Contador and Jakob Fuglsang are 16, and 18 to win the major Spanish cycling event, respectively.

Chris Froome boasts a spectacular form and even though he missed the Giro d'Italia, we are confident that he is the most likely to win, while Nairo Quintana will definitely see the podium.

La Vuelta Live: Where Can You Watch It?

The possibilities of catching the Vuelta live are endless. Apart from a long list of TV channels who are providing live telecast of the event, it is also possible to catch the event on Internet streams available at popular bookmakers. OddsDigger manages to provide information about all these bookmakers under one roof, apart from providing the best cycling betting tips.

Chris Froome, Richie Porte and Nairo Quintana are leading the La Vuelta odds lists and new updates on this amazing race will be unveiled this summer. Stay tuned for more at OddsDigger.com!